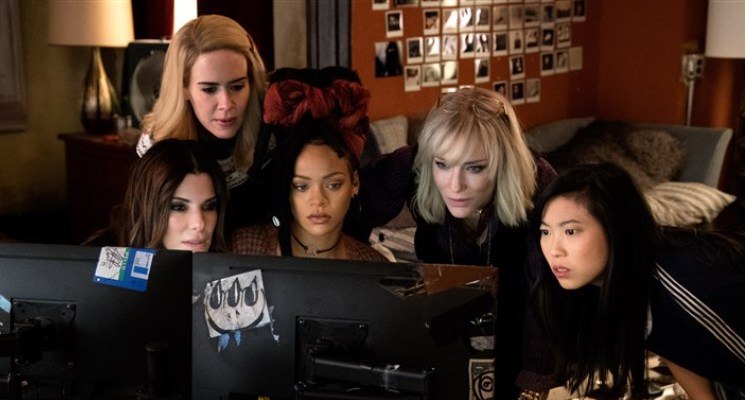 Ocean’s 8 is a Hollywood executive’s dream of a summer movie. It’s modestly-budgeted, eschewing the grand-scale action and VFX-plosions which pepper the traditional action blockbuster – yet it’s also light, fun, and breezy, in the way that only summertime films are allowed to be.

All that would explain why so much of the marketing around Ocean’s 8 was centered on how peppy and enjoyable the film is (straight down to the tagline: “Having this much fun should be a crime”). And make no mistake – Ocean’s 8 is certainly a fun film. Directed by Gary Ross (The Hunger Games) from a script he wrote with Olivia Milch, it’s an entertaining heist movie with an engaging and talented cast.

But it’s also a frustratingly restrained film. Not with regards to its story or characters, but to its source material. Ocean’s 8 is closely tied to the film franchise which spawned it, to the point that, despite early signs of promise, it never develops a real identity of its own.

Perhaps that’s due to branding confusion. Ocean’s 8 is a sequel, marketed as a reboot, that too often feels like a remake. However you slice it, the film is an ostensible follow-up to the Steven Soderbergh’s acclaimed Ocean’s film trilogy (itself inspired by a Rat Pack film from 1960). It’s inherited some of the strengths of that franchise, but stumbles into its weaknesses as well.

To wit: Soderbergh’s trilogy was flashy and well-produced, with a star-studded cast (led by George Clooney, Brad Pitt, and Matt Damon) and a genuine sense of fun. But the films were quite shallow in their plotting and characterizations, which gave them a daringly all-or-nothing feel. When the plot was fired up, audiences could easily sit back and enjoy – but when the bag of tricks ran empty, we were left with nothing but a hollow shell of a film. (This was the unfortunate case with Ocean’s Twelve, easily the worst of the trilogy – a vapid, boring production that cared more about being “cool” than entertaining.)

Ocean’s 8 has its share of dull moments, but it maintains an air of fun and levity for most of its nearly-two-hour run. Much of the credit goes to the great cast, which includes Sandra Bullock, Cate Blanchett, and a scene-stealing Anne Hathaway. The women at the center of Ocean’s 8 are the primary attraction, followed by the film’s visual flair – a good use of NYC locations and an eye-popping assortment of glamorous dresses. (Bonus points for getting Rihanna to appear at the Met Gala without wearing a Pope hat.)

And at times, the film’s connection to Soderbergh’s Oceanverse works to an advantage. The air of familiarity lets audiences know what to expect, and there’s a great surprise cameo for series fans. But watching these women chart the course that Clooney and co. have thrice trod over, I kept wondering how much more enjoyable a film with this cast would have if it had been allowed to stand on its own, free of the comparative pressures which accompany a franchise reboot.

It’s particularly frustrating given that so much of the marketing surrounding Ocean’s 8 is designed to make the film seem different, when the only real distinction of the film is in its focal gender. All-female reboots are nothing new to Hollywood, but Ocean’s 8 exemplifies the conceit’s chief weaknesses.

Compare the film, as many have, with 2016’s deeply maligned Ghostbusters reboot. Here was a film thoroughly lambasted even months before its release, the idea of “lady Ghostbusters” too much for a certain subsection of the Internet to handle. Ocean’s 8 didn’t achieve nearly that level of vitriol (likely because the franchise it’s based on doesn’t have quite the same nostalgic appeal), but the lukewarm response to the trailer suggests that general audiences are tiring of gender-swapped reboots.

On the one hand, the concept makes financial sense. Originality can be anathema in the hyper-competitive world of Hollywood, which explains why reboots in general have become so common in the past decade. And letting women step into men’s shoes allows filmmakers to check off another box, as the idea of “Girls can do it, too” will certainly appeal to a sizable chunk of ticket-buyers.

But the truth is that there’s very little “empowerment” in taking a familiar male-dominated story and swapping in women. If anything, it only underscores Hollywood’s fear that female casts are unable to carry their own franchises – that they need the boys to give them a running start.

And sure, it’s true that female-led action/adventure films don’t always produce box-office gold. Thus far in 2018, Hollywood has released A Wrinkle in Time, Proud Mary, Annihilation, Red Sparrow, Breaking In, and Tomb Raider, and only the last of those would even qualify as a modest commercial hit. And it’s probable that the franchise-based Ocean’s 8 will deliver a stronger opening weekend than those other films, thanks to relative a lack of early-summer competition.

But that shouldn’t necessarily be viewed as a referendum on female-led reboots at large. Tomb Raider is not a great film, but it features a memorable lead in Lara Croft, well-played by Alicia Vikander. Lara is a long-popular character who was, yes, initially inspired by a man (Indiana Jones), but has been nicely and entertainingly developed in her own right. Her film didn’t generate a great deal of buzz, but it’s a step in the right direction – a fun, escapist film which stands on its own and features a compelling woman at the center.

Ocean’s 8 is a similarly fun film, but it’s stuck in the long shadow of the franchise which birthed it. Even if it rakes in plenty of cash, I’m left wondering what lesson Hollywood will learn. Will studios be inspired to produce original high-stakes films with female ensembles? Or will they instead be compelled to make an all-female version of Saving Private Ryan?

Before you start calling me melodramatic, just remember: Ryan could totally be a girl’s name.

Ocean’s 8 is currently playing in theaters.