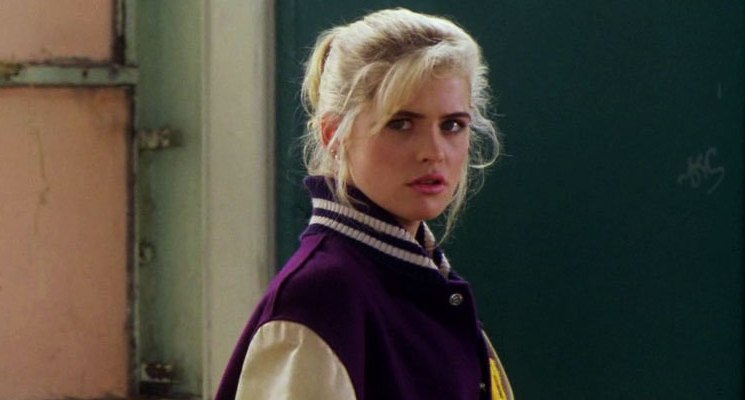 Just a brief mention of the 1992 Buffy the Vampire Slayer film will likely cause shoulders to shudder and faces to wince. While the Buffy TV series is a landmark accomplishment of story and character, the film which inspired it is generally dismissed as silly and pointless. Many Buffy fans haven’t even watched it. Joss Whedon doesn’t even regard it as canonical to the series, and he’s the guy who wrote it.

It’s a wonder that Buffy ever made it past the film stage and onto The WB in the first place. The film was not a hit with critics, nor did it do very well at the box office. (It opened on July 31, 1992, the same weekend as Robert Zemeckis’ Death Becomes Her; in terms of ticket sales, Buffy was completely trounced.) If not for the fact that TV executive Gail Berman happened to enjoy the film and offered Joss the chance to make a series out of it, television would likely never have seen one of its greatest shows reach fruition.

The general consensus is correct: Buffy the Vampire Slayer is a bad film. It’s tonally inconsistent, poorly paced, and features some pretty lame action sequences. Apart from a few memorable lines, the dialogue lacks the whip-crack snarkiness that came to define Buffy and her friends on the small screen. The film feels soft-pedaled for a juvenile audience, with little complexity to appeal to adults.

And yet… strange as it may sound, I don’t hate the film. Despite its obvious glaring flaws, I attest that there is merit to the original Buffy movie, even if that merit is largely disconnected to the TV series.

At the time the Buffy film was released, vampires were undergoing a bit of a renaissance. Anne Rice’s Vampire Chronicles books were forcing people to think about vampire lives (or un-lives) more seriously. Bram Stoker’s Dracula (released the same year as the Buffy film) also proved to be a smart and sophisticated hit with audiences. Buffy thus stood poised to deliver an amusingly tongue-in-cheek take on the vampire mythos, a cheerful riff on vamp mythology for the Heathers generation.

And, contrary to what some may remember, the film accumulated a pretty solid cast. Rising star Kristy Swanson brought a fun Valley Girl vibe to the title character, and Donald Sutherland gave the story some serious dramatic heft as her Watcher. And while Rutger Hauer was pretty forgettable as the film’s villain, Paul Reubens stole the show as his lackey. (Just try to ignore the fact that the film went into production not long after Reubens was arrested for, um, an “incident”). To outward appearances, the movie had all the marks of a modest success.

But Buffy, much like its main character, suffered from an identity crisis. Fran Rubel Kuzui, the film’s director, pushed to make the film more lightweight and fun than Whedon’s script called for, eschewing character development in favor of generic action scenes and equally generic comedy. The result was a clash of tones, and a film that alternated between light and dark throughout its run and stumbled awkwardly from one plot point to the next, before easing to a halt with an unsatisfying climax.

In retrospect, Kuzui’s intentions seem sharply at odds with the Buffy we know and love. Still, the faults in the finished product cannot entirely be blamed on her – Whedon was a relative newcomer to screenwriting, having cut his teeth on Roseanne only a few years earlier, and his dialogue here is not especially… well, Whedonesque. The film is problematic on multiple levels, too many to foist all the blame onto one individual.

And yet, despite all these issues, the Buffy film should not simply be swept under the rug as a false start to an eventually great franchise. Instead, we should appreciate the mistakes it made, and the manner in which it paved the way for the TV series and all the mystical WB/CW shows which followed. Buffy was an idea ahead of its time in 1992, and it needed to shake off a few wrinkles in order to become the series it eventually blossomed into.

Nowhere is this more evident than with the casting of Luke Perry as Buffy’s love interest. The film, ultimately, was not trying to appeal to Bram Stoker or Anne Rice fans so much as it was trying to appease the Beverly Hills, 90210 generation. Nowadays, we look back at the original 90210 as a generic “pretty teen” show – but in the early ‘90s, it was the generic pretty teen show. It was far from a brilliant series, but it ushered in the age of the soapy high school drama, setting the tone for hundreds of teen-skewing shows to follow. The Buffy film was an early copycat, but it was far from the only one.

If you can, for even a moment, ignore the Buffy TV series while considering the Buffy film, it’s worth doing so. It’s worth remembering the film for what it is, for the era in which it premiered. In those pre-X-Files, pre-My So-Called Life days, the idea of mixing high school with hell-beasts was laughable. Thankfully, the Buffy film gave us the first opportunity to laugh at the idea… and prepared us to take it more seriously in the future.