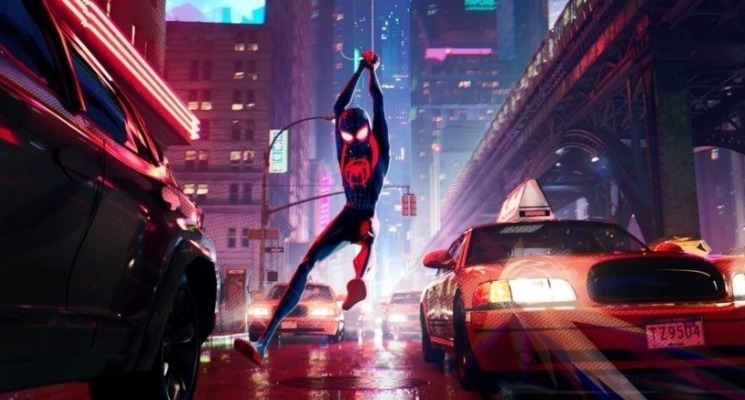 In the hallowed halls of Marvel Comics, past Thor’s hammer, behind Cap’s shield, and just to the left of Wolverine’s adamantium claws, sits the great Spider-Man vault. In it are contained the thousands of stories – both print and screen – centered on everyone’s friendly neighborhood wall-crawler. Spidey has starred in countless comic books, a dozen TV shows, and has had kicked off three different film franchises since the dawn of the new century. Forget market saturation – he’s webbed up the market like one of his arachnidan equivalents, and refuses to set it free.

So the idea that Hollywood can still find fresh new ways to breathe life into Marvel’s most ceaselessly distributable superhero sounds not merely risible, but ridiculous. Yet now we get Into the Spider-Verse, perhaps the freshest and most original Spider-Man film since… well, ever.

Sony’s latest addition to the Spider-canon distinguishes itself from its predecessors in description alone. The prime web-shooters here are not worn by Peter Parker, but by Miles Morales (Shameik Moore), an awkward Brooklyn teenager with a penchant for unlucky scrapes. Miles will be familiar to comic book fans who’ve followed the excellent series from Brian Michael Bendis and Sara Pichelli, but the filmmakers (including Lego Movie producers Chris Miller and Phil Lord, the latter of whom shares screenplay credit) have crafted a character to appeal even to the uninitiated.

Even beyond the powers he obtains when a radioactive bug sinks its teeth into him, Miles feels like a genetically-reengineered Spider-Man, combining all the best qualities of his silver screen predecessors – the pathos of Maguire, the obstinance of Garfield, the flighty youth of Holland. These elements mix and match to create a new kind of Spider-Man – one that can resonate with fresh-eyed kids just as well as nostalgic adults.

The film further gives Miles an air of freshness by contrasting him with the original Spider-Man. Its version of Peter Parker (Nick Miller) is a gruff, stubbly, beer-gutted ex-hero who’s more interested in tackling fast food than fiendish foes. Yet Peter is not the butt of the film’s every joke, a spider-turned-fly just waiting to be swatted. He and Miles develop a teacher/student relationship that ultimately flows both ways, with both men learning about the inherent greatness of both power and responsibility.

Peter’s backstory is well-known to anyone familiar with the comics, previous films, or just life-giving oxygen, so Into the Spider-Verse sums it up in a rat-a-tat burst that manages both humor and poignance in the time it takes to web up a clumsy crook. This sort of machine-gun-style exposition is delivered throughout the film, which never gets bogged down by overcomplicated questions about parallel dimensions and the multiverse. The terrifically constructed screenplay knows to dole out just enough information to keep kids from getting lost and adults from growing bored, and keeps the bulk of focus on character, humor, and action.

But even if the script were only middling, or even if it swung across well-webbed territory, the latest cinematic Spider-Man serving would still be (if you’ll pardon me) a marvel. And the reasons go beyond a level that any live-action film can attain.

For Into the Spider-Verse is one of the best-looking computer-animated films I’ve ever seen. CG animation, despite its realistic attributes, has often been criticized for its plasticine imagery, as they tend to feature rigid character designs that limit the genre’s “cartoon” factor. But films like The Lego Movie have tested the boundaries of computer-animated storytelling, blending an animated style with photorealistic movements. And Into the Spider-Verse takes the potential of computer-animation to a new level of innovation.

The film’s design is a mixture of art deco and Lichtenstein acrylics, blessing the film with the look of a “moving comic book.” Red and blue overlays convey movement – both organically and (when the action heats up) more spastically. Characters designs flow freely between the worlds of two and three dimensions, their Ben-Day dotted faces conveying their ever-changing emotions. Text boxes and word balloons blend seamlessly with free-flowing animation; wavy Spider-Sense lines crackle from Miles’ head.

Action scenes particularly benefit from the film’s aesthetic. Punches and kicks explode with dynamism, visual onomatopoeia filling the screen. (The film recalls Adam West’s Batman, but it’s less a sendup of the pop era than a loving salute.) Comic book stills, woven seamlessly into the story, provide thrilling action snapshots. The psychedelic climax is a visual feast, mixing Steve Ditko at his Dr. Strange level with a dose of Victor Moscoso and Rene Magritte.

So malleable is the film’s artistic design that it defies genre categorization, a fact made apparent as further web-spinning heroes enter the fray. Spider-Woman (Hailee Steinfeld) is subtly modeled after the art of her comic book designer, Robbi Rodriguez. Spider-Noir (Nicholas Cage) proves the style’s durability for a black-and-white aesthetic, while Peni Parker (Kimiko Glenn) channels the world of manga. Best of all is Spider-Ham (John Mulaney), a cartoon-within-a-cartoon pig whose loony antics suggest a certain Porky in his ancestral lineage. Each of these characters is given their own design, style, and identity, and together they make a veritable potpourri of Spider-Folks.

The result is a Spider-Man film – and, in fact, an animated film – like no other. Into the Spider-Verse may be furthering a familiar brand, but it never feels old, outdated, or shopworn. Even more than Homecoming, this is a film which proves that there is still fresh ground to be plumbed for Spidey and his amazingly-designed friends. I have no idea how many more Spider-Man sequels/remakes/reboots we’ll be getting in the future, but if this latest film is any indication, I can’t wait to see more.

Spider-Man: Into the Spider-Verse is currently playing in theaters.

4 thoughts on ““Spider-Man: Into the Spider-Verse” is the Best Animated Film of the Year”