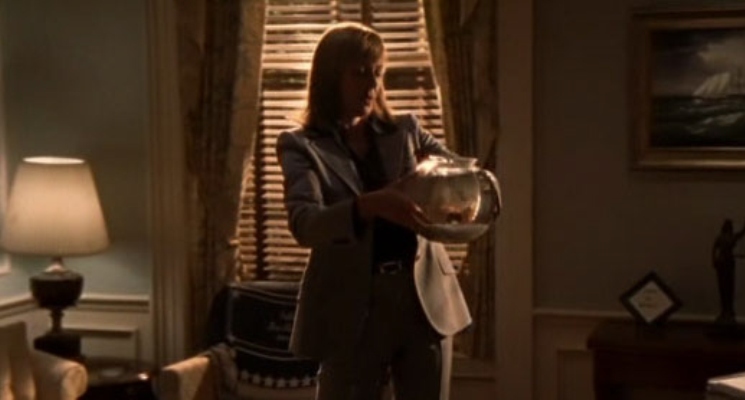 Network television is built on status quo – individual episodes may play around with character dynamics, but in the long run, nothing can change. Yet the longer a show stays on the air, the more difficult status quo is to maintain. Even the most reliable formula will eventually grow stale, at which point fans will begin hungering for change.

Long-running procedurals don’t go through radical formulaic changes, but they are likely to swap out key castmembers as the seasons pile up. ER cycled through two full generations of characters throughout its fifteen-season run. Ditto CSI. Actors move on, often to be replaced with unsubtle fill-ins.

The West Wing is too serialized to be classified as procedural (although it did perform a designated fill-in when swapping Sam Seaborn out for Will Bailey). But for five seasons, it has maintained a reliable status quo, spurred by its characters’ rigid occupations. But as we enter the sixth season – particularly after coming off a notably fatigued fifth – there are clear signs that the show wants to permanently break its mold.

That mold starts to fracture in “Liftoff,” the episode which finally dusts away the unsavory Middle East arc and charts the show for fresh new waters. The characters are all still the same, but the show is primed to start moving them around the chessboard.

So it is that the spine of “Liftoff” is formed around CJ’s quantum-leap promotion from Press Secretary to Chief of Staff. Although (as I mentioned in my “Third-Day Story” review) CJ has long been one of the show’s best and most complex characters, the show cannot simply catapult her into the second-highest-ranking position in the White House without batting an eye. So there are quick acknowledgments regarding the plausibility of her promotion, as well as even quicker nods to her gender. (As of this writing, no real-life President has ever appointed a female Chief of Staff.) And much of the episode is devoted to her growing acclimated to her new role.

The result is an episode with a very similar seed to “Access” – a day in the life of CJ Cregg – but executed on a far more entertaining (and, wait for it – accessible) level. Several of the best moments in “Liftoff” involve CJ getting used to her new and lofty position, while all her male colleagues – up to and including Bartlet – do what they can to ease her transition and convince her that she’ll do a fine job. The scene where Toby, Josh, and Bartlet all prank her with the idea of resignation is a fun reminder that the show is perfectly fine with its new status quo.

And on a macro level, the show seems fine. It’s only upon closer look that the problems begin to show.

Take Margaret, for example. For five seasons, she and Leo have had one of the best and funniest rapports on the series. But her role as comedic foil doesn’t translate as well to CJ – the two women don’t have nearly as much built-in onscreen chemistry with one another. “Liftoff” tries to use Margaret as the pivot point between Leo and CJ, but it’s not the kind of role her character was ever fit for. (Season Six will later try to develop Margaret more independently, although mostly through a few throwaway “is she gay?” jokes.)

And replacing CJ with Toby behind the Press Secretary’s podium also makes for a disappointing adjustment. As Annabeth Schott (making her first appearance in the series) rightfully points out, anyone replacing CJ in her old job will have an uphill battle ahead of them. But shifting Toby in her place feels like a particularly misguided move – he’s not a “people person” in the traditional sense, and is an odd choice to act as link between the President and the Press Corps. (One wonders why the writers didn’t have Annabeth take the position instead. A new character may not have CJ’s established vitality, but would certainly offer a fresh new perspective to the job.)

At least the episode is wise enough to acknowledge Josh’s stasis through all this. While his coworkers are busy job-swapping, Josh stays put. This seems odd – as the Deputy Chief of Staff, he’s the optimal pick to assume Leo’s role. But as Matt Santos (another debut appearance, and one that unsubtly foreshadows a larger role in the future) notes, Josh does his best work right where he is. Other characters may change and move on, but Josh will still be Josh. (Ironically, Santos’ comments will soon convince Josh to leave his White House job. But we’ll get there when we get there.)

“Liftoff,” like the episode preceding it, is largely transitional, and some of its transitions feel quite jarring. Nevertheless, the changes it implements are understandable, as The West Wing is now devoted to taking things in a bold new direction. The results, as we’ll see in the season’s second half, are quite worth the journey. But the journey itself could use a smoother road.

+ In one of the best “onscreen blooper” moments in the entire series, Bartlet’s famous jacket-flip maneuver accidentally hits CJ in the face, causing her to duck out from beneath it. Kudos to Janney for not breaking stride or character.
+ Josh’s epic hallway slide. Pointless, but cool.
+ CJ circling everything she doesn’t understand in her press briefing… including the press briefing itself.
+ The montage where potential Press Secretaries audition for Toby and Donna isn’t all that funny, but I like the low-talker. (I also like to imagine he’s asking Toby to wear a puffy shirt.)
+ Charlie showing CJ her special door to the Oval Office.
+ Taylor Reid is still awful, but I appreciate the continuity reference.