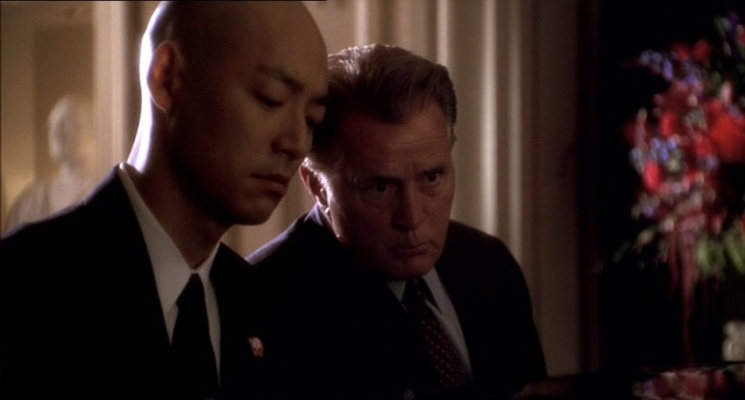 “Wake me when we have a consensus.” – Bartlet

Certainly, the episode shares many of the same flaws that afflict the fifth season in general – it lacks subtlety, with every message blatantly hammered home, and it struggles in attempting to reconcile real politics and fictional. But beneath these external issues is a story that is not only well-crafted on its own merits, but which carefully develops the ideas of the season at large.

The episode features two thematic threads effectively woven together. In one corner, we have the Bartlet administration grappling with the art of compromise – expressed first through Donna’s diet analogy, and then repeated by Bartlet. On another level, we watch the administration struggle to define itself that the kidnapping fiasco has blown over – expressed first through CJ’s milk analogy, then repeated by Josh. (In a way, I should probably be happy that the episode so clearly spells out its themes – it saves me some extra work and analysis.)

In the character of Jai Yung Ahn, Bartlet sees an opportunity to foster peaceful relation between the US and North Korea – though the young pianist does not speak perfect English, his music transcends any language. But Jai sees his visit to America as an opportunity to defect, to escape from his native country’s oppressive clutches. He puts his full trust in Bartlet, assuming the leader of the free world will be able to assist him. But politics, as we’ve come to know, are never that easy.

CJ remains the voice of optimism throughout the episode: “This young man’s asking for freedom,” she tells Bartlet. “It’s what this country was built on.” Quickly shaping up to be the show’s most hopeful new voice, CJ delivers an argument that hearkens back to the first couple of seasons, when the Bartlet administration was more than willing to take risks and challenge their opponents. Regrettably, too much fallout from their previous endeavors has weakened the administration’s willpower, particularly against an intimidating foreign nation. Bartlet’s best option is to let the young man make his own choice, and trust himself to agree with it.

Though the first half of the episode piles on the exposition, the second half thankfully allows the emotions to tell the tale. The Korean word “han,” as Bartlet tells CJ, has no literal translation – “It’s a state of mind… a sadness so deep, no tears will come. And yet still, there’s hope.” It’s a perfect word to encapsulate not only Jai’s feelings, but Bartlet’s as well. As a leader, Bartlet has lost the drive which once guided him, and feels more vulnerable than ever – yet CJ’s comments in the episode do offer him glimmers of optimism.

Still, outside of the Oval, we don’t so much get hope or sadness as we get biting cynicism. Though Robert Russell was the “safe” VP candidate, the administration has been doing their best to ignore how poorly he’s viewed by most of Washington. Josh meets with Congressman Theo, the only House member poised to vote against Russell, and assumes his contrary position is borne out of a need for attention. But as it turns out, Theo firmly believes that Bingo Bob is a poor candidate, and knows that many White House staffers – Josh included – share that opinion.

Josh is even more self-righteous than usual in this episode – he mocks Donna’s Wisconsin roots with a string of cheese jokes – and when Theo finally does lend his vote of support to Russell, he’s more than willing to take credit for swaying the opinion. But as things turn out, it was Ryan who somehow convinced Theo to change his position, reminding us that Josh still has an unhealthily high opinion of himself.

The Russell development has ripples beyond Josh Lyman’s office, even if its effects elsewhere verge on sitcom-level storytelling. When Will’s attempts to write a flattering speech about the new Veep prove fruitless, Toby encourages him to temporarily free his mind, as they write up a mock speech explaining how they really feel about Russell’s nomination. But through a series of wacky circumstances (it’s never explained how, but I’m sure the circumstances were wacky), the sarcastic speech winds up on Bartlet’s teleprompter. Calling this setup “contrived” would be a compliment, but to its credit, “Han” does not dwell on the fallout very long. Bartlet improvises a few extra compliments for the speech, and Russell, rather than rebuking Toby and Will, reveals that he found their unused “additions” hilarious. “I know my public profile,” he explains. “I’m just glad to see there’s such a keen awareness of the job you’ve got ahead of you.”

Russell is, in fact, the most easygoing character in the whole episode, being fully cognizant of his position and taking criticism in stride. Couple this with the fact that the most proactive character of the episode may be Ryan – someone who, like Russell, we’ve barely even gotten to know.

The fact that the new recurring characters are portrayed as less negative than the longtime regulars (a trend we’ll see continue throughout the season) can be read in two ways. On the one hand, you could argue that, after four years of Sorkin-brand optimism, Wells is trying to emphasize our main characters’ more cynical side. (As we’ll see going forward, this is a valid argument.) But on the other hand, our heroes have been in the White House for what is now approaching a lustrum (look it up, in case you haven’t read my non-West Wing work), and they’ve been especially stressed by the seismic shifts of recent episodes. It’s perhaps not a surprise that the newcomers of Season Five are portrayed as more upbeat than the old standbys.

But however you choose to interpret it, “Han” is one of the highlights of the season. With a solid structure, strong thematic ties, and good, well-earned emotion, it can stand confidently among the episodes in Sorkin’s better years.

(In keeping with my own brand of optimism, I’d like to tell you that the season continues this streak of quality going forward. Unfortunately, the next episode is “Constituency of One” [5×05]. Brace yourselves.)

+ CJ realizing the cultural insensitivity of a piano piece named “Chopsticks.”
+ Okay, this time, the bagel joke was funny. Points for continuity here.
+ Wait… does no one in the Bartlet administration know the price of milk?!
+ Oh, Charlie knows. Phew. Thanks, Charlie.

– “This isn’t an autograph – it’s a message.” As always, Jed, we thank you for bluntly pointing out what viewers could easily have figured out for themselves.