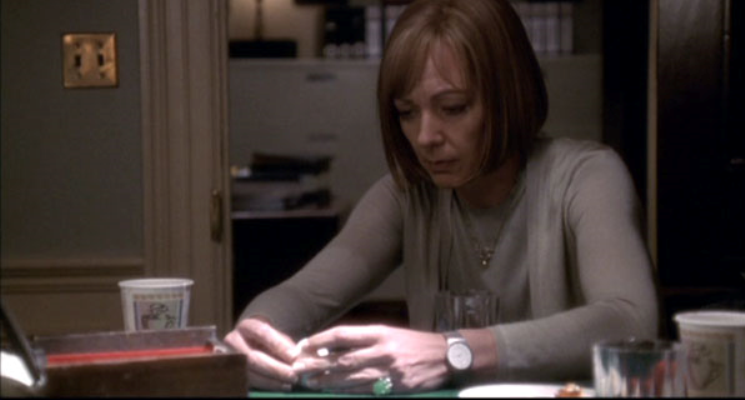 Among the numerous flaws of The West Wing‘s fourth season, one that I’ve most consistently noted has been the relative lack of freshness and originality. Too many elements have been recycled from earlier seasons, and there are even full episodes (“Holy Night” [4×11], for example) that feel like shuffled mixtapes of the show’s earlier days. What worked in the past now feels fatigued; once-great story beats have grown predictable and formulaic.

Now in the final stretch of the show’s Sorkin era, we get “Evidence of Things Not Seen,” an episode that, even by the season’s usual standards, feels alarmingly derivative of years past. We have an attempted shooting, a staff poker game, a controversial Republican White House legal associate, political deception of Russian President Chigorin, and Donna making eyes at Matthew Perry. We’ve seen all these things before, and they shouldn’t be nearly as fresh the second time around.

But remarkably, “Evidence of Things Not Seen” works pretty well. Instead of feeling lazy or redundant, the episode plays like a sort of “Greatest Hits” of the Sorkin era. Even if the story treads familiar ground, the emotional beats are fresh and effective.

Start with the most obvious of callbacks: Josh’s PTSD. As I discussed back in my take on “Noel” [2×10], Josh is a character who is practically incapable of genuine change. His innate stubbornness is an integral part of his character, and his rigid convictions have made for some intriguing drama. Calling back on his post-traumatic reaction to the Rosslyn shooting – and confirming that he has well and truly gotten over it – indicates just how resilient Josh is in the face of virtually any adversity. To drive the point home, “Evidence of Things…” further underscores his belief in two-party antagonism by pitting him against the affable but needling Joe Quincy. (Compare Josh’s realization that Senator Skinner is gay in “The Portland Trip” [2×07] to his deduction that Quincy is a Republican here – in both cases, it’s his belief in the awfulness of the opposing party that leads to the big “Eureka!”)

Josh’s unfair grilling of Quincy (spurred, perhaps, by the most unsubtle “Josh loves Donna” dialogue this show has yet delivered) is but one of several examples in this episode where our characters display their more cynical side. Elsewhere, Will and Toby criticize the government intelligence of a NORAD report gone awry, and Charlie drops all pretense with Zoey in discussing her new boyfriend. Some characters’ frustrations feel warranted – Bartlet’s attempts to play fast-and-loose with the aforementioned Russian leader over a covert ops mission ultimately prove fruitless, leading him to attempt an “honesty is the best policy” tack. But overall, this episode has a harsher edge than we’re normally accustomed to.

And that’s precisely why CJ is so crucial to the story. As we just saw in “Angel Maintenance” [4×19], CJ is now taking Sam’s place as The West Wing‘s idealistic core. She avoids any cynicism in the poker roundtable discussions, and retains optimism over the seemingly ludicrous idea that one can balance an egg on its end at the moment of the Vernal Equinox. At one point, CJ delivers a confident, off-handed speech about her faith in humanity – just a few minutes after she is nearly shot.

The shooting is the one jarring moment in an otherwise quiet episode, one so remarkably silent that CJ’s egg-balancing act actually serves as a suspenseful climax. (This episode also manages to sneak in a great throwaway joke about Leo’s love of thin pastrami and squeezable rye bread – was Sorkin just hungry during the scripting phase?) However ludicrous the connection between the Earth’s revolution and the vertical stability of a chicken’s offspring may seem, CJ ends the episode with more emotional satisfaction than any other character, particularly once you factor in her earlier beating of Toby’s ace-high flush. And that’s as it should be – in the world of The West Wing, idealism generally prevails, even if it may do so in some fairly unconventional ways.

There’s little in “Evidence of Things Not Seen” that we viewers have not seen before. But given the placement of the episode, and the execution of its story, it feels like a fitting reflection on the show’s first four seasons. Though we’re preparing to bid farewell to Aaron Sorkin, episodes like “Evidence” allow us to savor the moment.

+ CJ’s reaction to squeezing the rye bread. Man, CJ totally owns this episode.
+ Babish reference! I miss Babish.
+ Charlie letting nothing stop him on his way to reach Bartlet after the shooting.
+ There’s a White House in Gail’s bowl. Is Gail running out of ideas?
+ Keyworth reference! I miss Keyworth, too.

– While I give the show credit for mentioning Ainsley’s absence, there is, as usual, no explanation given for why she’s gone.
– Josh referring to Ainsley as a “sexy conservative.” Sigh…
– Charlie, Jean-Paul, blah blah blah.

* A Sorkin-penned episode featuring lots of annoying scenes with Bradley Whitford and Matthew Perry? If that isn’t unintentional foreshadowing, I don’t know what is.