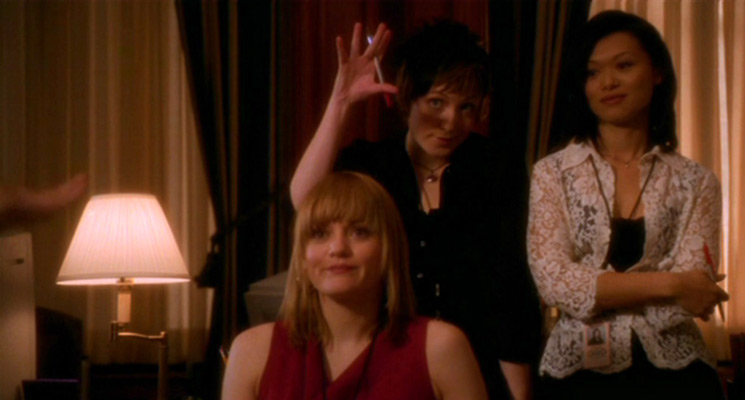 “Gotta give us points for our candor.” – Elsie

As someone who prioritizes character and thematic development over storytelling mechanisms, I tend to be forgiving of plot contrivances. Characters need a plot to drive them forward, after all, and themes won’t be delivered without a solid base to stand them on. So long as the end result is insightful and entertaining, I can overlook the liberties taken to get there.

But there are times when plot contrivances can pile up – and up, and up – to the point that even my most forgiving attitude cannot possibly overlook them. Such is the quandary when it comes to “The California 47th.”

I suppose I wouldn’t mind the massive contrivances in this episode that much if they were anomalous in an otherwise organically flowing season. Such is not the case, regrettably – it has often been far too easy to see the puppet strings behind Season Four, to spot the various gears and pulleys that drive us from one story development to the next. So I come into “The California 47th” with a wary eye, unsure of whether to chastise it for its numerous shortcuts, or merely take them for granted.

In truth, the episode never truly strains credibility. I suppose it’s possible, for example, that a photographer would walk by when Donna is lunching with an agricultural expert whom she does not realize is also a communist. It’s possible that a blowhard who chews out Andy and Toby could instigate a major fight because he accidentally “slips.” It’s possible that Toby’s speechwriting staff (you know, the one that was never seen nor mentioned before Will Bailey came along, and forever remains off-camera) would quit en masse upon Will’s promotion to Deputy, and it’s possible that three of the four interns Will is left with would all be named Lauren.

Sure, it’s all possible. Probable? Not so much.

But like I said, we’re in the good stretch of Season Four now. Bartlet’s second term has kicked off with an all-new set of important goals and ideals, and atop that, there’s the increasingly terrifying situation in third-world Kundu. Unlike the first half of the season, we now have tangible, recognizable stakes, paired with stories of significant dramatic value. The episode is meaty enough in its stories that the dumb contrivances can only do so much to diminish its power.

“The California 47th” also has something else going for it – it’s funny. It is, in fact, the funniest West Wing episode since the season’s two-part premiere, with a string of hilarious lines and verbal exchanges that add to the inherent entertainment value. Because “The California 47th” has a solid dramatic backbone, the jokes land far better than they would in some of the season’s flighty earlier episodes.

Thematically, the episode nicely highlights how, even at the dawn of a new Presidential term, the Bartlet administration has a few cracks in its frame. Cleverly, the episode ties in the administration’s latest hassle with the ongoing campaign of Sam Seaborn (whom we haven’t seen since “Arctic Radar” [4×10]). When faced with the opportunity to spend his weekend either endorsing Sam’s campaign or combating a Republican tax plan, Bartlet unsurprisingly chooses to help his old protégé rather than involve himself in the latest round of political combat.

It’s familiar character territory, but explored in a new environment, from a new perspective. We remember how eagerly Sam dropped his law career in order to help Bartlet’s initial campaign five years ago, and the loyalty Bartlet shows him here is a nice reciprocation that brings their relationship full circle. (Sam will inexplicably hop aboard the Mandyville Express after “Red Haven’s on Fire” [4×17], which means his series arc is now drawing to a close – although he’ll return for the end run of Season Seven.) Sam was never one of the show’s most complex or interesting characters, but his storyline has been one of the most consistently compelling aspects of Season Four.

Even as Sam is phasing out of the series, his replacement is slowly but surely phasing in. Will is now an official staffer, but he still has a few ladders to climb before he can garner the respect he deserves. The idea that all members of the speechwriting staff – who, as mentioned, have never been seen and were never really mentioned before Will showed up – would quit because a newcomer snagged the Deputy position falls pretty flat, but the fact that three of his remaining four interns are all named Lauren emphasizes just how monochromatic Will’s job currently is. The Laurens don’t have much to distinguish them in personality, but that’s okay – Will hands out some football jerseys, and the women immediately differentiate themselves. Though his situation may be trying, Will knows not to give up.

Like “Inauguration (Part I)” [4×14] before it, “The California 47th” is the first half of a two-part story that is made stronger by its conclusion. “Red Haven’s on Fire” [4×17] makes all the plot contrivances in this episode worth the effort, and even forgives some of the less successful story threads. (Toby and Charlie getting into a fight with some hotheaded civilians doesn’t exactly scream “great drama.”)

As with many Season Four episodes, “The California 47th” isn’t especially deep. But it’s definitely a step in the right direction. Between the Sam/Bartlet material and the Will/Cassie/Lauren/Lauren/Lauren scenes, there’s a lot here worth watching. Just don’t watch too closely, or you’ll start noticing all the seams.

+ Bartlet referring to Debbie as “Miss Hamantashen” and “Mrs. Hottentot.”
+ Bartlet threatening to kill Josh if he leaves him alone with Jean-Paul.
+ Will made Rice Krispie Treats for the speechwriting staff! Makes you wonder why they all quit.
+ The crowd overhearing Bartlet’s rather, um, unusual phone conversation.
+ One of the writers of this episode is named “Lauren”! HAHA! HAHAHA! HAHAHAHAAAAA! I’ll stop now.

– Why would Charlie want to play pool with Jean-Paul? For that matter, why does Jean-Paul keep ending up in my Minor Cons?