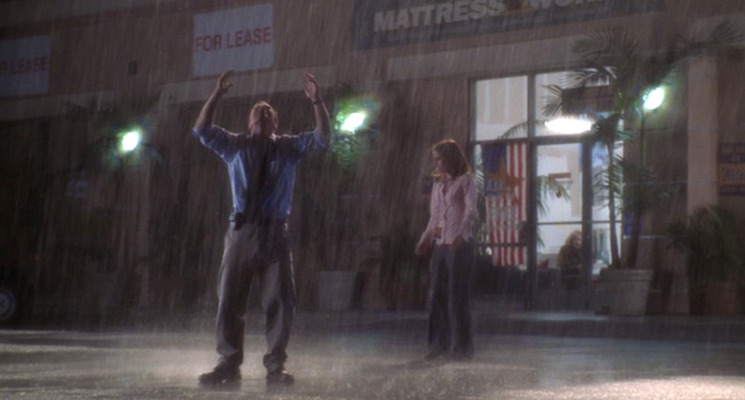 “Is there any suspense at all today?” – Steve

I have no idea how to read someone’s palm. Tea leaves hold no inner meaning for me. My Magic 8-Ball has been gathering dust on the attic shelf for many a year, and there’s little chance I will ever get the sort of prescient newspaper subscription that blessed Gary on Early Edition.

Still, I don’t need extra-sensory powers to predict that this is going to be a very short review, possibly the briefest I’ve ever written for this website. Part of the reason can be attributed to the fact that I’ve covered most of the issues with the reelection arc’s climax in my review of “Game On” [4×06], and part can simply be blamed on the fact that, even on its own, “Election Night” offers very little in the way of substantial analysis.

“Election Night”, to its credit, is not quite as insulting as “Game On” [4×06] – it’s still not a good episode, mind you, but it lacks the innate cluelessness of its predecessor. The problem is that it barely contains any real dramatic weight. With the election apparently branded a foregone conclusion, the episode simply coasts along, biding time until the final scene, when Bartlet can deliver his victory speech. “Election Night” isn’t a truly bad episode, but with no stakes holding the story in place, it is a very boring one.

Oh, there are moments of charm to be found: Debbie establishing her presence as the new Executive Secretary by lording her power over Josh, Charlie encouraging Anthony’s friend Orlando to vote for the first time, and Donna’s Meet Cute with Jack Reese. (Reese isn’t a particularly deep or interesting character, but it’s nice to see Sorkin add another likable Republican to the show, especially now that Ainsley has more or less vacated to Mandyland.) We also get more material with Will, whose development here is so ludicrous (he practically makes it rain at his command) that it almost justifies the way Team Wells chose to dial his idealism back several notches in Season Five.

There are certainly amusing subplots throughout the episode, but none of them stick dramatically, because the center of “Election Night” is too vapid and hollow to support any strong supplemental development. Josh and Toby fret over the chance possibility that Ritchie could still emerge victorious, but their concerns are played for comedy – at this point, even the show itself is treating the reelection as a joke. There’s some drama shoehorned in about Bartlet’s relapsing MS, but it’s so downplayed that it barely registers into the story at all.

I’m struggling to come up with anything worth really talking about with regards to this episode, especially since I already joked about thematic redundancy in my take on “College Kids” [4×03]. I suppose the final scene demands mention. After delivering his victory speech, Bartlet has a brief exchange with Abbey about his MS, which temporarily prevented him from seeing the teleprompter. “It’s going to be harder this time,” Abbey tells him. “We can still have tonight, though, right?” Bartlet responds with a smile. It almost seems like – for the briefest of moments – Sorkin is acknowledging how completely tepid this early Season Four arc has been, and that we should enjoy ourselves in the moment before things start to get more intense.

(It’d be easier to buy into that if the next few episodes fully returned the show to its former greatness. Sadly, they do not. But those are criticisms for another time.)

+ The teaser sequence is an unnecessary follow-up to the already-problematic teaser to “Game On” [4×06]. Still, Josh’s exasperated “YES!” at the end always makes me laugh.
+ Similarly – despite the poor context – Toby’s “Tempt the wrath of the whatever from high atop the thing” line is always worth a smile.
+ Andy: “Hey, sports fans, this is getting exciting.”
+ Toby taking Josh’s suggestion to bribe the hospital nurse.
+ Orlando getting so excited about voting that he tries to do it twice.

* Toby speculates that he and Andy will be married on Christmas. As we’ll see shortly in “Holy Night” [4×11], that holiday holds more significance to him than that line would assume.