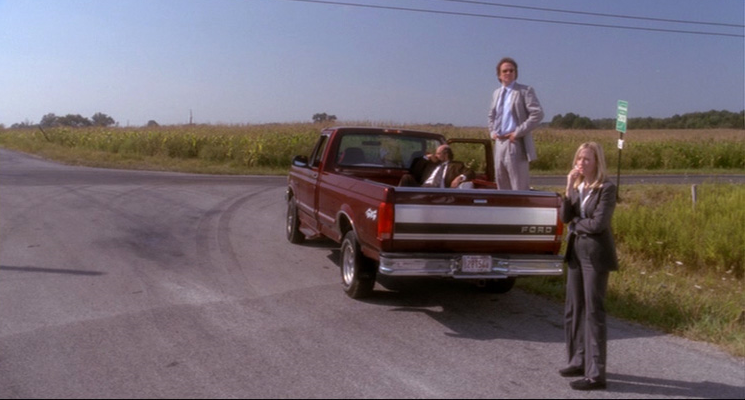 “This can’t be a national therapy session.” – Josh

At the time it first premiered, “20 Hours in America” aired both its parts simultaneously in a single, two-hour block – the only West Wing episode to ever do so. In the years since, the debate over whether it should be judged as one or two installments has become a minor issue among critics – the DVDs pack the two halves together as a single episode, while streaming services like Netflix and Amazon identify them separately.

Which approach is the correct one? It’s a tough call, and probably not one with an official answer. For my own part, I will be reviewing the two episodes separately (even though it throws off the symmetry of this season with the other six, giving it 23 episodes instead of 22). The reason is twofold: First, there’s a lot to discuss in each half of “20 Hours in America”, so both can hold up easily with their own reviews. Second, exploring the two halves individually allows me to explain why the dichotomy of this premiere serves as a fitting microcosm for Season Four as a whole.

Last season ended with the decidedly dark “Posse Comitatus” [3×21], which took Season Three’s unsettling themes and shaded characterizations to a chilling (by West Wing standards) climax. Much of the moodiness of the season was deepened by the surrounding elements of the post-9/11 real world, and following a long summer break, Season Four attempts to return the show to its brighter roots. Many scenes in “20 Hours in America” take place out-of-doors, on and around the sunny cornfields of Indiana. The bridging plot is lightweight, even if some of the linking material remains heavy.

The tone of the first half of “20 Hours in America” can be problematic, in fact, since the shift from the relative weightiness of Season Three makes it all too easy to pass this premiere off as a simple comedy. But to look past the many jokes and humorous setpieces is to realize that this premiere actually does a remarkable job of setting up the primary theme of Season Four.

The first season focused on the realization of idealistic power, while the second and third dealt with the use and misuse of it, respectively. The theme of the fourth season is actually quite obvious, at least in the early episodes – it’s all about retaining power.

Yes, Bartlet is officially on the campaign trail, eyeing a second term as Election Day looms ever closer. And Season Four, both pre- and post-election, will deal with the fragility that comes with working in the White House and the difficulty of maintaining one’s level of stature there. “20 Hours in America” sets this theme up marvelously, through several characters and in several locations.

So much of this episode is devoted to various people all doing their best to tend to Bartlet’s ego, with the intent of keeping his reputation good and untarnished for as long as the campaign lasts. To that end, we have some indirect follow-up to Season Three – Leo continues to field issues from the Qumari administration, trying his best to prevent an international incident. At the same time, Sam juggles several assignments as he attempts to fill in for Josh and keep the President to his regular schedule, ensuring that Bartlet doesn’t get lost in the midst of his assorted daily arrangements. All the staffers throw themselves into the campaign to the best of their ability – even CJ, though still reeling from Donovan’s sudden death, forces herself to stay focused enough to field arguments with master campaigner Bruno.

“I think it’s going to rally,” Bruno remarks to Bartlet late in the episode. He’s referring to the plummeting Dow Jones, which is referenced from time to time during this episode. Bartlet has shifting feelings of his own on the matter of the Dow, but the surprisingly optimistic insistence of Bruno – a character who always seems to fear the worst – that it will rebound suggests that he’s trying his hardest to keep the President positive.

Bartlet himself only reminds us that his ego does need tending in times like these – he auditions several potential Executive Secretaries to replace Mrs. Landingham, but none seem to fit him. Why? Well, one woman comes off as rather boringly straightforward, while another is blithely condescending of him. Though he won’t admit it to himself, Bartlet wants a secretary whom he can willfully lord his trivial knowledge and good humor over. A secretary who won’t make him look like he’s only the second-smartest person in the Oval Office.

Yes, the episode acknowledges, Bartlet can often be rather pompous. So it’s understandable that the other characters are doing their best to make him appear more down-to-earth, particularly when he’s campaigning in the more literally down-to-earth states. Still, there’s one staffer who spends the episode doubting the general policies that his coworkers implement.

That staffer is Toby, and it’s his own doubts regarding Bartlet’s impression on the public that drives the premiere’s most interesting story thread. It’s because Toby is uncomfortable with the way the latest campaign speech was written, after all, that he decides to stray from the gathering when Bartlet delivers said speech in Indiana. And it’s because he strays that Josh joins him to convince him of the positives of that speech, and that Donna is sent to fetch the two of them, and that all three of them are unwittingly left behind by the campaign, stranding them in the middle of rural Indiana.

Stripped of their White House credentials, Toby, Josh, and Donna are forced to experiencing Middle America firsthand. The civilians they meet in this generally right-leaning state are overall kind and well-meaning people – that is, until anyone brings up the election. (“Didn’t vote for him the first time, don’t plan to the second time,” more than one native states, almost robotically, in regards to Bartlet.) The episode’s portrayal of the rural folk is not subtle, but it’s not mere conservative caricature, either. In following our trio of heroes, we come to realize that for all of Bartlet’s campaigning, there are simply some folks he’s never going to win over. (For clarity’s sake, this episode aired at a time when Indiana was well-known for voting Republican; in the years since, the state has more often taken the Democratic route.)

The magnifying lens that “20 Hours in America” shines on rural America makes us second-guess the episode’s messages about Presidential posturing and ego-boosting. What is the purpose of making Bartlet out to be something he’s not if the state he’s spending so much time and effort campaigning in won’t vote for him either way? It’s a question the episode grapples with and addresses directly through Toby.

Of all the staffers, Toby is the only one who’s uncomfortable with the image of Bartlet that the campaign is painting. Josh argues in its defense – “Most people didn’t like the smartest kid in the class,” he affirms, reminding us of Toby’s conversation with Bartlet in “Hartsfield’s Landing” [3×14]. He does have a point – who would want the Bartlet we saw in “Hartsfield’s Landing” [3×14] in charge of the country? But Toby recognizes the President’s strengths and weaknesses better than any other staffer, and is put off by the way his administration has seemingly fooled itself into thinking it can win over such a conservative state. But is he ultimately right?

Donna attempts to act as mediator between the two, but her words of reason are ignored as Josh and Toby continue to grow more frustrated – with their continually unsuccessful attempts at getting back home, and with their conflicting views on the direction of the campaign. The bet that Josh dreams up – in which the loser must spend the rest of the day introducing himself with the line “I work for the President” – suggests that even he understands the cynicism inherent in campaigning in such an anti-Bartlet state.

Many thematic questions are left up in the air by the end of this episode, and they will be answered (for the most part) in the superior “20 Hours in America (Part II)” [4×02]. Keep reading…

+ Bartlet relating the story about the farmer and the mud hole.
+ Leo referring to Margaret as “Jack LaLanne”.
+ Josh: “Whoa. Danger, Will Robinson.”
+ Josh and Toby losing control after learning about the Daylight Savings rule.
+ Josh following the instructions on Sam’s answering machine. “SAAAAAAMMMMMM!!!!!”
+ Bruno getting uppity over the phrase “elitist feminist”.
+ Josh hanging up on CJ while she’s raving about dry rub.

* At the start of this episode, Sam is shown as overworked yet eager. He’s clearly building toward bigger things…
* Tyler asks Toby, “You ever love so much, it hurts?” By the end of this season, Toby will have done exactly that.