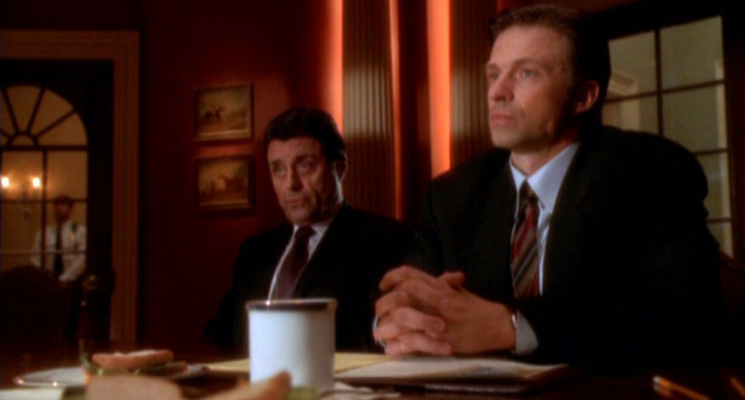 “Carelessness doesn’t have to exist for a mistake to be made.” – Leo

“Enemies Foreign and Domestic” opens with a most peculiar “Previously On…” segment. Rather than filling the space with a few short clips of character/plot-centric events from episodes past that are about to come into play, the opening features nothing more than brief snippets of the main characters all stating their names and basic job descriptions.

It’s not the first episode to pull this trick – “Celestial Navigation” [1×15] and “Shibboleth” [2×08] featured similar openings, ones which gave us little insight into the show’s serial elements and did little more than provide us with a brief and rather superfluous outline of the primary cast. Openings like these are a sign that the writers had some space to fill, but didn’t have much of importance to fill it with.

Still, in the case of “Enemies Foreign and Domestic”, the opening works in a rather interesting way. One by one, we are reminded of precisely what positions Bartlet, Leo, Toby, and the rest of the staffers hold in the White House, as if the episode is trying to get us to think of those characters by way of their job descriptions. Were this actually the intention, it’s certainly a crafty one – as the episode itself spends a great deal of its airtime telling us not to judge characters by the positions they hold.

We’re now in the home stretch of Season Three, and the themes are beginning to tie up in ways that both serve as fitting closure for the season as a whole and segue into the themes of Season Four. “Enemies Foreign and Domestic” features a pair of relevant story threads that feed into the theme of idealized power gone wrong rather nicely – but nearly as interesting is the way the episode crafts its own subtle message: Don’t judge a man by his job title.

Don’t believe it when Leo implies that the head of a large computer-chip corporation has carelessly screwed his own company. Don’t believe it when Charlie receives a letter addressed to the President from a man associated with the Steel Workers Organization Committee. And don’t believe it when Toby profiles a Russian reporter as being controversial because of her unpopular political stance. Because as big and important as those credential covers may sound, the books inside contain rather different stories.

The West Wing was criticized in its early days for making its characters and stories too pat and obvious, and if nothing else, “Enemies Foreign and Domestic” demonstrates how far the show has come in terms of subverting initial impressions. The computer company’s president was trying to protect the consumer public in shutting down his company; the letter Charlie received was written decades ago, and refers to a company that’s long since changed its name; the reporter Toby interviews was declared controversial due to her underhanded mudslinging. Those first two stories simply serve to give us another chance to watch Bartlet be awesome, as he bails out his friend’s company and invites the aging letter-writer to the Oval Office, while the third is a thematically-attuned perspective twist on the idealistic thinking the series thrives on.

But really, the weight of the episode lies in two other storylines, ones which push the “job description” point to new and intriguing heights that continue to develop the messages of Season Three.

The first of these centers around a political summit that Bartlet is set to attend in Helsinki… until Fitzwallace (making his first appearance since Season One) informs him that Russian forces are secretly helping Iran build a nuclear weapon – a prospect which puts Bartlet’s foreign-relations plan on the scrap heap. The purpose of the storyline is threefold: It draws attention to the continually thinned ice the administration has found itself in for much of the season with regards to public reaction; it brings up the subject of foreign terror (more directly than earlier Season Three episodes), which will play into the last few episodes of the season; and (most subtly) it crafts an interesting take on the subversive “job title” theme.

Nikolai Ivanovich is at first a dry and off-setting man, one who seems less concerned about the potential effects of the summit than about having the President acquiesce to his various simplistic requests about respecting Russian culture. When news breaks about the nuclear threat, it becomes all too easy to assume that Ivanovich is in on the plans – not only does his job description identify him as a liaison, but his unpleasant air and seeming dismissiveness of the White House make him look rather uncomfortably suspicious. (That the actor playing him, Ian McShane, has since gone on to play one of TV’s all-time greatest villains on Deadwood doesn’t boost his nice-guy credentials, either.)

But as it turns out, Ivanovich is secretly trying to help Bartlet, passing on a message about the need for peace. It’s a clever double-twist about how sometimes you should judge a book by its cover, and it’s one of Season Three’s subtler attempts to allay the post-9/11 fears that still lingered in the air during the spring of 2002.

That’s not to say that all such attempts in this episode are equally subtle, but even this episode’s other story thread relating to international terror is a good deal more delicate than the hamfisted messages of “Isaac and Ishmael” [3×00] or “The Women of Qumar” [3×08]. In fact, compare CJ’s actions in “The Women of Qumar” [3×08] with the ones demonstrated here – at no point does she make outraged comparisons between terror nations and Nazi Germany; at no point does she go through an emotionally stressed moment on a par with “They’re beating the women!” In fact, in the teaser sequence of “Enemies Foreign and Domestic”, she takes the opposite route, delivering a sarcastic comment about Saudi Arabia without any inflection of hatred or anger.

CJ’s job has always been to deliver the news to the press, briefly (get it?) and without personal bias. Though she’s been known to regularly joke and banter with the reporters about the more benign headlines, she’s remained relatively civil – but episodes like “Lord John Marbury” [1×11] have given indication that she can get a little too candid around those reporters. Here, she does her best to keep her emotions in check, but her comment puts her in the crosshairs of an angered fanatic.

The CJ story will play out over the remainder of the season, and I’ll discuss its larger developments in the next three reviews. But for the moment, it serves to add another shade to the continually darkening Season Three. That fact that one of Bartlet’s staffers has been singled out for a death threat – one with significantly more warning (and thus, more tension) than Charlie’s in Season One – is another sign of the administration’s fickle mortality, something which will grow in importance in Season Four.

So take solace in that simple and straightforward “Previously on…” segment, friends – at the moment, it’s the only unshaken status quo we can comfortably rely on.

+ Toby rambling about free press.
+ Bartlet deciding not to wear earmuffs during the summit.
+ So great to have Fitz back after a two-season absence. See, not everyone stays in Mandyland.
+ There is a Venus symbol (which denotes women) in Gail’s fishbowl. Gail has a twisted sense of humor.