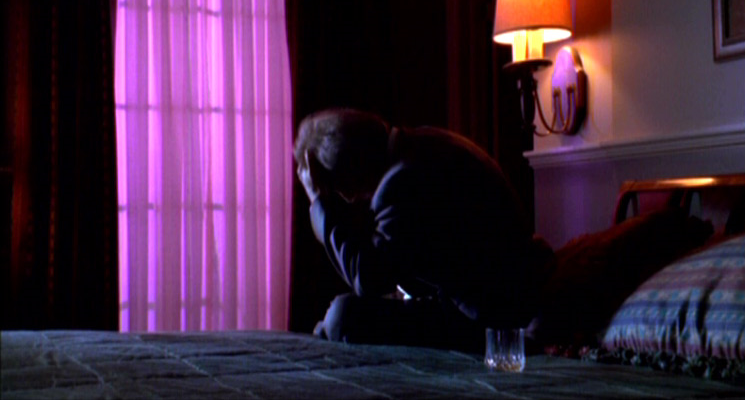 “Too high, and it’ll chip when you drop it. Chip the ice, and it’ll melt too fast in the scotch.” – Leo

The face of The West Wing – the bedrock on which its foundation is built, and through which many of its themes are most tellingly executed – is Jed Bartlet. The veritable dream President, Bartlet is the literary inspiration of a mind disappointed with the state of the cold, hard reality of government, a mind imaginative enough to conjure up something better. (In a way, we should be thankful that the US government is often such a mess – otherwise, The West Wing might not be nearly as effective.)

But for every yin, there is a counterbalancing yang, and for every starry-eyed President, there is a firmly grounded Chief of Staff. Aaron Sorkin understood that an idealized Oval Office would need at least one pragmatic anchor to keep the rest of the series from growing drunk on its rose-colored sensibilities. That message was first made clear years before the show’s debut, with The American President, where righteous President Andrew Shepherd is balanced in his ideals with the more practical Chief of Staff, AJ MacInerney. (It’s almost fitting – indicative of how closely related and integral the two positions are to one another – that Martin Sheen, who played MacInerney in the film, was cast as Bartlet in the TV series.)

Leo McGarry is not the show’s most dramatically developed character, nor is he the one most often spotlighted. Yet few characters in the series are capable of achieving in the audience the same level of emotional investment that he does. As perfectly played by John Spencer (whom Sorkin envisioned when he first wrote the role), Leo is the perfect conduit between Jed Bartlet and the numerous staffers who serve him. Spencer expertly captures both the hard-edged crustiness of a man well-worn by years of service and the soft-hearted, grandfatherly affection of a teacher always willing to share his knowledge – two identities integral to both understanding the needs of the President and communicating them to those who work for him.

The friendship between Leo and Bartlet is the most crucial of the series – no other character, when placed in the same room as the President, humanizes him as much as his Chief of Staff. So their relationship works not only as a balancing of the series’ ideologues, but as a strengthening of Bartlet’s own characterization.

All of which makes “Bartlet for America” one of the most moving, effective, and all-around best episodes The West Wing ever produced.

Leo has been in compromising positions before – both his divorce from Jenny and his alcohol addiction played prominent emotional roles in Season One. But in those instances, Leo insisted on shouldering the difficulties alone, and any outside help from Bartlet was purely the President’s decision. Here, though, Leo is asked to testify against his best friend, and Bartlet – for all his efforts – is unable to help him. Without a safety net beneath Leo, the results of his square-shouldered loyalty to the President are on full display, and are simply fascinating to behold.

Just watch as Leo sits at his deposition, with question after question fired towards him. He corrects any legal or political errors the judges make, and more than once does he stop the proceedings to quietly ask his lawyer if she’d like to grab lunch with him. So great is his loyalty to Bartlet that he refuses to give any of his opponents so much as an undeserved inch, and chooses not to even take the trial process too seriously.

Bartlet and Leo are separated for much of the episode, yet they still factor importantly into each other’s business. Bartlet wastes no time in informing Leo that he and his attorney look like “a 50s screwball comedy” (in much the same way that Josh and Donna look like a 40s screwball comedy, I suppose – what is it with Sorkin and screwball romances?), first planting the idea of a date between the two in Leo’s head. The fact that the President can be so frank with his right-hand man (late in the episode, Bartlet even cracks a joke to Leo about his shooting in Rosslyn) is the show’s finest probe into the depths of his character. And Leo himself? Well, he’s influenced Bartlet’s decisions on occasion.

It’s perfectly fitting that Leo was the one who first planted the idea of running for President in Bartlet’s mind. Bartlet himself developed a political mind at a young age, but for all his expansive knowledge, he was too bound by routine and familiar territory to recognize his inner potential on his own. It took an outsider – the show’s most grounded and realistic outsider – to look at this quiet, dry-witted New Hampshire governor and recognize in him a man destined for greater things. It took someone who recognized that the country needed improvement, and realized he just happened to be friends with the perfect man for the job.

That the words “BARTLET FOR AMERICA” are first introduced to Jed by way of a hastily-scrawled-upon cocktail napkin indicate just how out-of-left-field the idea seemed at the time. And indeed, it took Bartlet a while to really get behind the idea. Watch in flashback as he takes risk after daunting risk – voluntarily taking a public physical, revealing his MS condition to John Hoynes – cementing him as an honest candidate through and through, but also revealing his unconscious doubts about ever being elected. (“Now is when people are listening,” he tells Abbey early in the election cycle. “I’ll make my speeches, get whooped on Super Tuesday, and we’ll all go home.”)

But Bartlet was just too good a candidate for the public to ignore. In fact, his MS didn’t poke any holes in his campaign until the week before the election. The bitter, stinging irony there was that those holes were poked by his closest friend.

Season Three, as I’ve stated already, is The West Wing at its darkest, an introspective look at what happens when idealistic thinking goes wrong. It also pushes its characters into their darkest corners, a fact no more unsettlingly evident than in the flashback where a drunk and disorderly Leo accidentally lets it slip to an associate that Bartlet, immediately prior to a debate, has collapsed. It’s a flashback that returns to haunt him in the present-day story, finally cracking his seemingly impenetrable will.

The scene where Leo describes to Jordan what happened on the fateful night three years ago, interspersed with dimly lit and hauntingly scored snippets of the evening in question, is one of the most dramatically effective sequences in the entire series. Even more so than the Josh/Keyworth psychiatric session in “Noel” [2×10], the sequence taps deeply into the mind of one of our beloved protagonists, and captures his dark and difficult actions in all their harrowing detail.

“I like the little things,” he tells Jordan, before launching into a detailed description of his affection for finely aged wine, as well as the care he takes to drop the ice into the glass. Leo, being the show’s most human character, also has the most human weakness, but he’s intelligent enough to know that weakness inside and out, understanding that he is unable to ever truly overcome it. Watching him describe the process of preparing a good bottle of scotch – voicing over his hauntingly shadowed hotel suite – we witness a man who has come to terms with his problem, yet feels just as much a victim to it as ever.

“What happened in the room, Leo?” Jordan presses.

“I’m trying to tell you what happened,” Leo responds.

The trust he shares with Bartlet is the stuff of legends, and nothing should be able to sunder it. But that’s exactly what the alcohol does – in a moment of weakness, he let himself slip, and effectively betrayed his closest friend. Speaking to Jordan, he pins all blame on his alcoholism: “Ain’t nothing but a family thing.” The cruel irony is that his addiction threatens to fracture his (very familial) relationship with Bartlet.

Leo’s pain is felt like none other. And it extends beyond the Hearing Room; over in the White House, his absence leaves the other characters (specifically Josh, with his unsuccessful attempts to help his friend and mentor) more agitated than we’ve seen them since the end of Season Two. Even the politics don’t run quite as efficiently – with the Chief of Staff absent, Agent Casper must report news of a threat directly to the President. (Though this does at least lead to one of the few upbeat moments in the body of the episode, as the FBI does end up catching the responsible party.)

Only adding to the irony of the situation, Leo is ultimately granted a reprieve – brief though it may be – by none other than a member of the Republican counsel. Cliff Calley has already been painted as a decent guy, but Gibson, with an extra bit of evidence on his side, has a justifiable point when he presses Leo for withholding information. That Leo is saved from having to own up to his faults gives the episode a transparently happy note to end on, but it feels less like a victory than a narrow escape. The Bartlet Administration has been rendered all but toothless by the MS scandal, and the fact that they are here rescued by a member of the opposing party is indicative of how desperate their situation has become.

But even through the darkness and despair, the episode chooses to end on an uplifting note. Bartlet, of course, harbors no feelings of resentment toward Leo for his one night of weakness, but he goes the extra mile to show a touching bit of gratitude to his greatest friend. His Christmas gift – the “BARTLET FOR AMERICA” napkin, framed behind glass – makes for one of the show’s all-time most moving moments. Not only does Bartlet remember that Leo was the man who inspired him to run for President, and even after all the uneasy laboring he went through on the campaign trail, still thinks of it as “awfully nice” of his friend, but he even kept the napkin around long enough to return the inspirational message.

A friend like Bartlet is a rare friend indeed – Leo realized that when he first scribbled down that three-word phrase, and he realizes it again now. He’s left shocked, speechless, and eventually, in tears. And I don’t need much convincing to join him.

“Bartlet for America” remains the greatest of The West Wing‘s Christmas episodes, working not only as an emotional rollercoaster, but as a stunning character piece – one that’s weaved seamlessly into the season’s overall arc. It’s about as perfectly written, directed, and acted as you could hope for; a true holiday miracle from start to finish.

+ Josh referencing Leo’s “Guy walks down the street and falls into a hole” story from “Noel” [2×10].
+ Mrs. Landingham! So good to see her again.
+ CJ throwing the basketball through a closed window. Silly CJ, thinking women could be good at basketball!
+ Before you kill me for that previous comment, keep in mind that we later find out in “Faith Based Initiative” [6×10] that CJ is in fact very good at basketball, and was probably just faking her clumsiness here so the guys wouldn’t realize that.

* Leo praises Bartlet by comparing him to a baseball pitcher on the mound in the way he makes his own decisions. At the end of “Memorial Day” [5×22] (the series’ own deconstruction of “Bartlet for America”), Bartlet literally stands atop a pitcher’s mound as he makes the crucial decision… to go against Leo’s wishes.