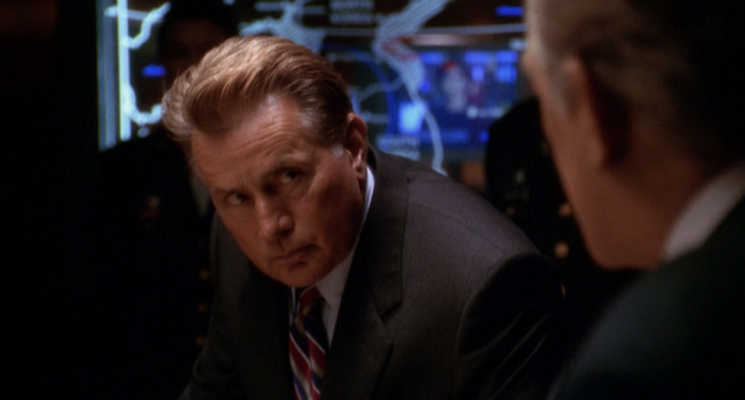 The average script for an hour-long network drama runs about forty to fifty pages. Not so with The West Wing. Under Sorkin’s pen, scripts typically exceed seventy pages, and it shows. Characters talk fast, and they talk constantly. The dialogue fuels the show – and we should all be thankful that Sorkin is one of the most talented dialogists to ever run a TV series.

Yet for all the breathless conversations the show in known for, there are a surprising number of silent moments in “Gone Quiet”. Granted, it’s not as though the title would particularly suggest otherwise, but there’s something odd about the amount of dialogue-free moments in this episode… particularly when they all come in the form of uncomfortable pauses.

As I mentioned while discussing “Manchester (Part I)” [3×01], the Bartlet administration has grown overconfident in its ventures – stimulated by their integrity in the wake of the MS scandal, they’re convinced that they’re on the rightest track of all. But in “Gone Quiet”… well, they’re proven otherwise.

Watch as Toby attempts to argue with an Appropriations Committee member about the government funding of modern art. Toby is not one to ever flinch from what he believes is right, but he walks a fine line when trying to defend America’s seedier and more abstract artists, who gain money that could just as easily go to protective security for national parks. But it’s the Appropriations woman’s ultimatum – “Let’s wait until November and see how many voters disagree with me” – that forces him into a brief moment of silence. Is the funding of a small collection of pretentious artists really something to risk losing votes over?

Sam has the more blatant uncomfortable pause, after Bruno calls him out on the monetary difficulties of the Bartlet administration. (“Okay, I’m gonna sit quietly for a moment.”) As I mentioned in my take on “Manchester (Part II)” [3×02], Bruno is an outsider, and thus has a far more objective view of the administration than the starry-eyed Sam. The question, then, remains as to how he and the staffers can agree on policy.

“I’m tired of working for candidates who make me think I should be embarrassed to believe what I believe,” Bruno says. He has a clear vision in mind – to paint Jed Bartlet as the Democratic Party. Unfortunately, the staffers can’t seem to think of him as anything other than the Bartlet party. Bruno wants the White House to appeal to the common people, but the staffers seem worried that this line of thinking could land them back in their pre-“Let Bartlet Be Bartlet” [1×19] territory.

It’s Toby, fresh off his debate with Administrations, who reaches a compromise with Bruno. The campaign needs to run on issues – not ones focusing on independent artists most people have never heard of, but on universal issues of safety, security, and support. The Bartlet administration is focused on pushing its own agendas – but if they want votes, they should single out the agendas that most of the country will agree with.

That’s not to say that “Gone Quiet” is entirely an episode about compromise, but the subject – which will take on harsher forms as the season progresses – is a consistent undercurrent. Abbey, formerly thinking of herself as a supporting player in Bartlet’s trial, is shocked when Oliver Babish tells her that she is her husband’s greatest liability. Her medical proficiency – the formative thing she has used to establish herself as an individual since the election – now threatens to damage Bartlet’s Presidential reputation in a way that he couldn’t even damage himself.

So Abbey falls victim to the Bartlet Administration’s weakened state, and to avoid any malpractice suits, decides to forsake her medical license. The difficulties of the MS scandal grow more harmful with each episode – now, even those associated with Bartlet more personally than professionally are suffering the consequences.

But it’s Bartlet who suffers the most internally in this episode. And it’s not for lack of optimism – when his staffers rejoice over the way the House Majority Leader flubbed his answer to the “Why?” question after announcing that he would run for President, Bartlet defends him by stating that it’s not all that easy a question to answer. Bartlet continues to maintain a positive angle to the campaign, even as his staffers are rejoicing over their opponents’ failures.

But the more he tries to keep things stable, the more difficult things turn out. When suspicions arise that the military has lost a submarine in North Korean waters, Bartlet is cautioned that they may have purposely gone quiet. Even as Leo is required to deliver the information, he offers his own advice: “Trust the captain, trust the crew.”

But Bartlet has let his trustworthiness hurt more than one military operation in the past (see “The War At Home” [2×14]), and so he calls in Asst. Secretary of State Albie Duncan. Duncan, with his extensive knowledge of past failed war missions, gets more time to speak than just about anyone else in the episode, recounting several of the more unfortunate incidents to Leo. Bartlet, meanwhile, is forced to remain quiet while the older and supposedly more knowledgeable Duncan speaks out. (Bartlet’s period of silence reigns far longer than that of his staffers, and soon leaves him banging his head on his desk.)

Duncan shares a few similarities with Bartlet – both love to talk about history and recite little-known nuggets of trivia. But Duncan is older and more cynical toward the subjects he speaks about, and his thoughts thus come off as more forceful. Even Bartlet, as optimistic as he tries to remain to trust the sub’s captain and crew, is eventually influenced by Duncan’s hard-edged stories and chooses to take action.

And that’s when the truth comes out – the submarine was never in any danger. Bartlet, caught completely off-guard by a Situation Room development, is at a loss for words, and struggles to speak in a manner not too different from the flummoxed House Majority Leader. In the end, he can only echo Leo’s advice from earlier in the episode, before leaving the room in a flustered daze.

From the length at which he spoke, Duncan appeared to have all the answers – but they led Bartlet to the wrong conclusion. Had the President opted to remain quiet, things would have sorted themselves out. But, uneasy over his leadership skills as he’s been since the MS scandal, he nearly made a most un-Bartlet-like decision that could have caused more trouble than it was worth.

Where does that leave him? For the moment, doubtful, not to mention more pessimistic than we could have anticipated. When CJ asks him the burning question of why he wants to run for President, Bartlet, usually a master of wordy answers, admits that he doesn’t know.

For one of the few times in the series, there is no musical cue to fade us out. Instead, the episode simply goes quiet.

Postscript: This episode was the first to be written after September 11th. As such, the underlying theme could be interpreted to represent a “moment of silence” by the series. Were this indeed Sorkin’s intention, it was easily the subtlest and most digestible response to the attacks that the season ever gave us.

+ CJ singing (and improvising) the lyrics to “I’m Too Sexy”.
+ Stockard Channing’s real-life injury is written into the series. (Sorkin had previously done a similar thing when Robert Guillaume suffered a stroke on Sports Night.)
+ In case the review didn’t make it clear, Bartlet banging his head on his desk is one of the show’s funniest visual moments.

* Bruno’s speech about the troubles between the two political parties underscores how much he hates the stereotypes that come with being a Democrat – and makes his support of Vinick in the last two seasons more understandable.