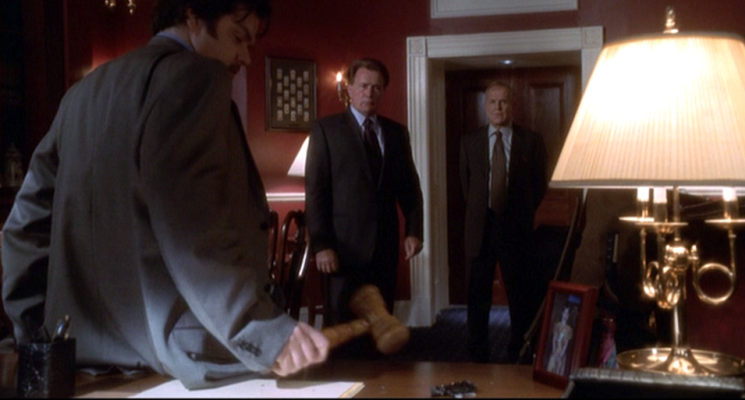 “He did everything you do if your intent is to perpetuate a fraud.” – Babish

They’re all slaves to it.

Oh sure, they can put on their sunniest smiles. Sure, they can strut through the halls with their most confident swaggers and deliver their most rousing speeches and snag the last crab puff at every reception. And they can do it all while being ten times as intelligent as real-life politicians and fifteen times as witty. But they’re still slaves to it.

I’m referring, of course, to the underlying political system on which America is built. Against this system, even the President has only so much sway. Bartlet knows this, and will always know it, right up to the end of his term. (Think of the opening scene of “Tomorrow” [7×22], when he alights on how certain rules of government were forever laid in place by the Founding Fathers centuries before his inauguration.)

At various points in “Bad Moon Rising”, characters call attention to the crippling laws of the system, to the seeming futility of certain rules and regulations beyond their control. Sam questions his own malfeasance in a legal matter. Charlie criticizes the unnecessary paperwork involved in college registration. And CJ is forced to spend hour after hour investigating a White House leak, finally arriving at the exasperated end result: “Leaks happen.” (Hers is a more exceptional case, as she is assigned it by Toby, who – understandably, after the events of the last episode – has become rather high-strung about how easily secrets can leave the White House.)

The West Wing may give a fantasized view of politicians, but it still presents a less-than-glamorized view of politics. Even in Season Two, which is built around the theme that power can be used idealistically, the show spares no expense in demonstrating what an uphill struggle it is to accomplish even the most minute of tasks in the face of unflinching and overwhelming opposition. And at this point in the season, when Bartlet is preparing to tell the world about his multiple sclerosis – this is the time to most fear that opposition.

Perhaps you’ll look back at some of my earlier Season Two reviews and wonder if I’ve cast the season in too cynical a light. But any cynicism that exists in the season only serves to strengthen the optimism. Even in this very episode, amidst all the scenes of characters complaining about things they’re unable to control, we have Josh deciding to send $30 million in bailout money to aid Mexico. Why? As he explains to Donna, “Because we can.”

In some other scenario, those three words may have sounded like a patronizing statement coming from an all-powerful world entity, but on this show, the meaning behind them is all too clear. The Bartlet administration will never be able to allay every conflict it comes across. Rather, the President and his staff must monitor all available situations and fix the ones that they’re able to. Because they can.

That is the show’s proper definition of idealized power – and it’s one that will open a whole new set of discussions when we get to Season Three. For now, though, it’s the perfect segue to talk about this episode’s use of Bartlet.

Bartlet, of course, has been the forerunner of “Because we can” since the start of the season, be it the patronizing version (“In This White House” [2×04]) or the fix-what-you’re-able version (“The Portland Trip” [2×07]). And just like his staffers, he finds himself for much of this episode in a situation seemingly beyond his control. It is his reaction, however, that stimulates the drama.

Now that Bartlet has made up his mind to reveal his multiple sclerosis to the world, he has no patience for the preliminaries involved. He would care not to speak to lawyers (“That’s what usually brings on the episodes,” he wryly remarked in “17 People” [2×18]), and judging by his sarcastic demeanor through much of this episode’s early acts, it would appear he’d just as soon get it over with as quickly as possible. But there are rules involved – even for such an unusual predicament as Bartlet’s, there are unwritten laws to follow when making this sort of revelation. And like it or not, Bartlet is forced to abide by them.

Leo, still the more down-to-earth half of the series’ core friendship, understands all too well the necessity of abiding by these unspoken rules. Bartlet needs a lawyer, and he needs one who understands the rules as well. In short, he needs Oliver Babish.

In an early scene, Bartlet laments that he’s already gone through four Legal Counselors, none of whom lasted too long. (Recall the incredibly hotheaded Lionel Tribbey and you may figure out one reason why.) Given that Bartlet’s only been President for two years and change, that’s a pretty sore track record – but Babish, first introduced in this episode, will hold his position until the final year of Bartlet’s Presidency.

What is it about Oliver Babish that makes him click so perfectly into the world of The West Wing? Well, unsurprisingly, he’s highly intelligent and very good at what he does. But more importantly, he does what he does for the greater good of the White House. Whereas Tribbey threatened coworkers who opposed him with a cricket bat, Babish’s own “weapon of destruction” is a justice’s gavel, which he uses to smash his Dictaphone so that it won’t accidentally record a private conversation between him and the President.

Babish makes it clear to Bartlet exactly what he’s up against, and ensures that he has the President’s complete trust. The lack of attorney/client privilege lends an extra note of unease to their conversations, and even Bartlet slowly starts to realize the gravity of his situation. But he has a confident attorney in Babish, who recognizes that he’s taking on an incredibly difficult case, yet also understands that the best way for them to win is to go charging directly at the opposition with all their might.

Can you guess what other philosophy this invokes?

I’ll give you a hint: It involves walls. And full speed.

Bartlet, by the end of the episode, has grown to take his predicament more seriously. Yet although he recognizes the many strings he’ll soon be forced to pull, he is determined to pull them with the same idealistic determination as he did even before he even set foot in Babish’s office. When he orders Charlie not to lie on the witness stand, it’s not only because he doesn’t want his young aide to be accused of perjury on his behalf. It’s because Bartlet still fully believes he can ride out anything the coming weeks and months will throw at him, even after he learns just how damaging those things might be.

The title “Bad Moon Rising” (invoked in the episode when Babish voices his concerns about coming events) paints this as a setup episode. Still, it’s a remarkable setup episode, even if it lacks the major punch that the payoff episodes of this season deliver. Season Two is surging toward the finish line, and it’s gaining more ground with every step.

+ In referring to politicians who could potentially screw the White House over, Toby mentions Henry Shallick, Ann Stark, and Seth Gillette. That, my friends, is internal continuity at its finest.
+ During the scene where Bartlet is grilled by Babish, the camera opens on a chessboard before panning up to the men conferencing. A little reminder to how Bartlet will often turn to chess in pressured times.
+ Josh’s joking flirtation with Donna following her “tough love” statement is an amusing reminder that even after that touching moment the two of them shared in “17 People” [2×18], he still considers the idea of a romantic relationship with her as comedy fodder.
+ Josh’s World War II analogy. It’s just underhanded enough to avoid being preachy.
+ Donna having some fun at CJ’s expense. Poor CJ.
+ There is a… faucet? Leg? Elbow? Well, there’s something weird in Gail’s bowl.

* Charlie apparently knew about Bartlet’s multiple sclerosis without being told. This is a sign of how close he’s developed a bond with Bartlet, and that bond will be developed further in Season Three.