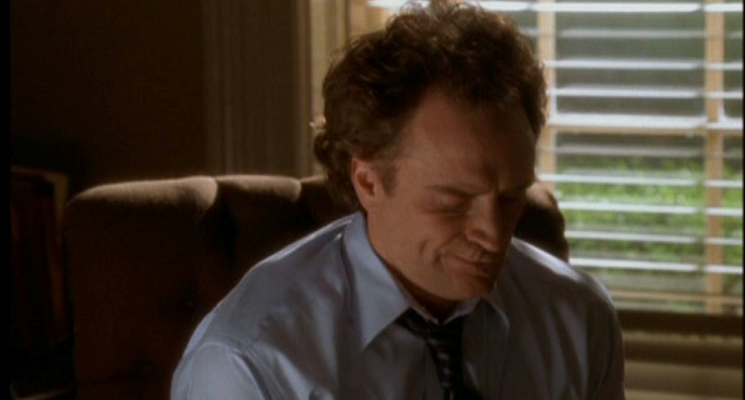 If you watch TV as often and as closely as I have (and, for your own personal health and sanity, I hope you don’t), you’ll come to notice not only the end product that shows up onscreen, but the means the writer used to convey it. There are countless literary devices (or “tropes”, as theyre affectionately called) which television writers use to present the themes and inner messages of the stories they pen. If done skillfully, the resulting episode can be a wholly entertaining and insightful experience. If the means are laid on to thick or spread too thin, however, the final product can turn out discomfortingly lumpy.

“Six Meetings Before Lunch” has an intimidating task before it: It must maneuver things into position for the game-changing turn of events in “Let Bartlet Be Bartlet” without seeming too contrived or obvious in the process. And while parts of the episode do successfully get their points across, other aspects are delivered with the aforementioned level of lumpiness.

The early minutes of the episode pretty much summarize what works and what doesn’t work about this episode: The White House staff watch with bated breath as the Senate votes on whether or not to appoint Roberto Mendoza to the Supreme Court. As soon as the appointment is made official, the staff erupts into thunderous cheers, and the champagne corks start popping. It’s an emotionally satisfying moment, as we watch the first notably risky maneuver the Bartlet Administration has made bears fruition, and it’s a crucial scene story-wise, encouraging the staff to take greater risks in the future.

And… then we take a sharp right turn into abstract comedy as the staff watches and applauds while CJ lip-syncs to “The Jackal”. The scene is… off-putting, to say the least. I get what Sorkin was trying to do here – provide a cheerful and comedic relief following the tense teaser sequence, and show just how celebratory the victory is – but it simply tries too hard to be amusing. The scene feels awkwardly out of place even with the buoyant first-season tone, even more so when you consider that this, um, “talent” of CJ is never spoken of outside this episode.

Sadly, the “Jackal” sequence is not the only moment when this episode fumbles the ball. The Sam/Mallory material also disappoints, at first teeming with potential but failing to deliver on much of it. The debate the two have over liberal sensibilities seems as though it’s setting the stage for larger internal conflict – can Sam’s unusual views be a sign that change is on the horizon for the administration? But the debate turns out only to be a front – a mode of opposition research fueled by Leo, and Sam actually agrees with Mallory all along.

There’s a sense that this story hints at an underlying theme which bridges this season to the next one – that power, in order to be maintained and effective, must be examined and respected from all angles. (This theme is put front and center when Ainsley is brought on board in “In This White House”.) But the execution is limp, in part because the story holds off this point until the end, leaving us to sit through what comes off as little more than a couples’ bickering between Sam and Mallory. This wouldn’t be so bad if I was able to put more stock into their relationship, but as I mentioned in my “Enemies” review, Mallory is not among the show’s most well-written supporting players. In the long span between her hilarious introduction scene in the “Pilot” and her one true act of nobility in “Tomorrow”, she’s mostly used as a catalyst for Sam’s arc, and not a terribly interesting one at that.

Speaking of uninteresting characters – yes, it’s time to talk about Mandy. (Relax, folks… I won’t be criticizing her much longer.) “Six Meetings Before Lunch” takes Mandy’s useless and irritating stance to a whole new level as it openly mocks her character, suggesting that even the writers were starting to realize how redundant she had become. Her vocal attempts to get the zoo a new panda bear culminates in an (admittedly funny) scene in which she ruins Toby’s (admittedly creepy) good mood. And nothing says “parodizing” like the moment when Toby remarks about how much she’s grown from her early days of hating Josh, only for her response to very directly clarify that she hasn’t grown at all. It’s moments like this that further justify her disappearance between Seasons One and Two, as Sorkin was starting to turn her into an intentional figure of mockery.

Okay… That’ll do for my criticisms of this episode. Let’s turn to the good stuff, since this episode thankfully has a good deal of that as well. For one thing, we get to watch CJ further grow into her own role as a strong and assertive Press Secretary as she does her best to cover things up after First Daughter Zoey lies to a reporter. Just as things look as though they could potentially turn sour for the Bartlet family, CJ proves her mettle by rapidly cooling a few potential flames. She’s still got a ways to go before she becomes a truly realized and valued member of the Administration, but watching her slowly broaden her skills with the press is a constant treat.

When Bartlet hears about his daughter’s predicament, his first impulse is to defend his daughter and set the press straight. The way Bartlet is willing to directly chew out the press is a quick reminder of the conflicted state he’s in at this stage in the season – no longer overly concerned with personal self-image, but also confused as to the level of integrity he should display. Fortunately, CJ sets the President straight, affirming her position in the White House as the person who best filters stories from non-stories. The respectful boldness with which CJ states her authority to Bartlet is a sure sign pointing toward her growth as a crucial member of the Administration, right up to her crucial turn in “Liftoff”.

I’ve saved the best part of “Six Meetings Before Lunch” for last. This, as I’ve already stated, is a time of impending change, and nothing sells this point better than Josh’s pre-lunch meeting with civil rights advocate Jeff Breckenridge. As with so much else the Administration has become embroiled in over the season, the meeting arises out of a need to keep the government stable while generating as little conflict as possible. Josh, as Leo points out, is the best counterpoint to a difficult and potentially crippling argument – he’s unflinching in his opinions, able to argue Breckenridge’s points far beyond the strains of most other staffers. (I will go into a lot of detail about why Josh’s steadfast nature is such a crucial facet of both the character and the series in general when we get to “Noel”.)

We’re expecting Josh to deliver a key solution just when he reaches the breaking point, perhaps equipped with a Sorkinian speech about the ills of slavery versus the ramifications of a financially crippled budget. But that’s not what happens.

The idea of a man demanding the government pay him and his friends $1.7 trillion for long-ago slave labor is almost risible in its concept – but that’s the very point. Breckenridge knows he has practically no chance of getting his desire fulfilled, yet he argues it anyway. The point, he implies, is not to “win” at every argument, but rather to discuss and debate it, and in effect, continually grow as a nation.

“This country’s meant to be unfinished,” Breckenridge tells Josh. “We’re meant to keep doing better.” It’s a simple phrase, yet it’s also an inspiring one, and will serve as the driving force behind Season Two. Breckenridge knows his demand is too idealistic to ever completely become a reality, yet that’s the very thing which inspires him to present it.

The final scene of “Six Meetings Before Lunch”, in which Josh and Jeff arrive at this satisfying-in-its-lack-of-satisfaction conclusion before going to – you guessed it – lunch, is the best part of an episode which features equal shares of highs and lows. When all the right ingredients combine, the episode looks pretty tasty. When they don’t, there’s that lingering feel you get from overeating. But perhaps even in its less digestible spots, “Six Meeting Before Lunch” can stand as the final footnote to the Introduction of the series, before “Let Bartlet Be Bartlet”, the Season One finale, and the year that The West Wing truly becomes… The West Wing.

* A reporter comments to Gina about how unimpressed he is with the Bartlet Administration’s Secret Service. Gina shrugs him off, but his words have a disturbing tinge in light of the fact that the President will be shot in “What Kind of Day Has It Been”.
* Charlie mentions that Zoey was trying to help a drug-using friend. Sadly, as “Commencement” can testify, this won’t be the last time that drugs and Zoey will make for a bad combination.

Next Episode: Let Bartlet Be Bartlet