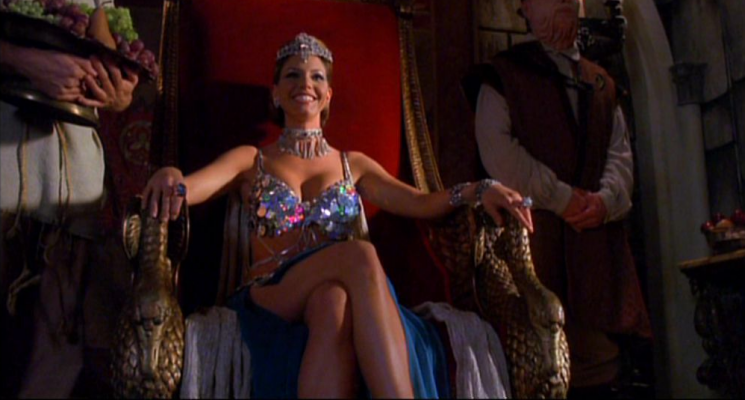 “Over the Rainbow,” like the previous episode, is largely setup without a lot of payoff, but like its predecessor succeeds because of its comedy and the fun it has in the process. Its chief mistake is repeating the exact same material we heard in the past episode, concerning most things; the character issues, central themes and elements of foreshadowing all make an encore here. Once again, it’s hardly bad television, but it speaks of laziness, which is something you usually don’t expect from a show of this quality. A show can be flawed and be watchable; a show can have serious problems and still be very good. But the one thing a show cannot, and must never be, is boring.

But, a slightly boring episode of Angel chalk full of fun dialogue and amusing moments is still many times better than a boring episode of a much lesser show. And what keeps its score at the same level as the last episode is that it, for all its re-hashings, does do a few new things that are important in retrospect of the entire Pylea arc, which carries us right to the finale. And even though its purpose or direction isn’t revealed until the last, painfully hysterical moment of the show, Cordelia does get some genuine development. However, take care to note that this review will be far shorter than my usual fare. For my complete analysis of the themes of the arc thus far, see my review of “Belonging” [2×19].

The new material we get comes from finally arriving in Pylea. The girth of this odd world’s thematic purpose comes in “Through the Looking Glass” [2×21] and “There’s No Place Like Plrtz Glrb” [2×22], but what we get here is somewhat useful. We learn the basic aesthetics: Populated by demons, it’s a medieval type of dimension, where not unlike in our own past, a culture bound hopelessly by ignorance and ritual has been consumed by xenophobia and greed; humans, who commit no atrocities other than being physically identifiable as different, are enslaved and bluntly treated like work animals. Pylea, essentially being a cartoon mirror of our world’s past, meant to highlight the graces of our present world’s ugliness, basically lays out the character’s conflicts in a way that forces them to deal: literally.

Cordelia is forced to bear a burden placed on her by a society in need of certain things. In our world those things are champions and good people, and in Pylea they are workers and saviours. Her visions are not-so-slyly referred to as a curse, which Cordy obviously can’t disagree with given how they’ve socially isolated her into her heroic duty and become increasingly painful. However, that a curse and a burden are usually things that accompany positions of great prestige, power and respect is no secret to the writers who play a fun, if not overtly clever, mislead about Cordelia’s fate.

Her abilities are a curse, yes, but they give her power to recognize evil and help fight against it, a lofty position that clearly deserves gratitude and respect. And since Cordy has wanted to be nothing if not a real, actual princess her entire life, it’s fitting that she gets her just reward. However, we mustn’t forget that she is still referred to as cursed. Just as for Angel, who is initially caught up in the wondrous and rewarding fantasy that is Pylea, the next episode will bring harsh truths about the aesthetically appealing simple life, much like the worst aspects of the avatar roles chosen for our characters to play in this land.

At least here, before we get to the real meat, we dig in quickly and get some hints about what everyone is going to be doing running around in this No. 2 version of hell. Gunn has made his choice, but can he stick with it? Of all the gang (minus Lorne), he is the most doubtful and uncomfortable about being in Pylea, initially reluctant to go at all. He’s chosen his side, yes, but he’s not entirely sure if it’s the right choice just yet. Wesley, who has been having difficulties leading his new group since he took command of it in “Disharmony” [2×17], picks up the threads of the team and instantly starts taking effective charge.

But Pylea is a harsh enemy, and his equally harsh self-critique, no doubt instilled in him by his father, takes over when the group is captured, nearly rendering him impotent. The role of leader is at first glamorous, but Wesley’s fantasy is quickly crushed just as Angel and Cordy’s are only just beginning. No wonder he has a worse time there. And if he’s unhappy, imagine how Lorne feels. The green demon who speaks lovingly of discovering music and building his beloved club on the very spot from which he escaped his home-sweet-hell sinks deeper and deeper here. In our world he’s the fantastical one, but now, he’s just stupidly out of place and hated for it.

To look back over what I’ve just written is kind of shocking. This is possibly the shortest review I’ve written for an episode of this show yet and will likely be the shortest for a long time to come. As I said, the episode’s greatest flaw is its boring re-hashing of earlier conflicts. “Belonging” [2×19], at least, did something a little new by giving those conflicts a clearer voice and properly highlighting them for us. Pylea’s new, sure, but doesn’t get interesting until next episode, in which I’ll get in a little deeper along with the episode.

+ Angel’s strangely correct “battery” theory.
+ Aggie’s cut-off.
+ Angel getting absolutely giddy about the sun.
+ Fred being all crazy, unsure of her name and words and stuff.
+ The big fight scene, and the crushing smash cut back to reality.

* All the main characters’ conflicts (as discussed in “Belonging” [2×19] ) and personal problems are brought out into the open even more here: Angel’s uncertainty about his status as a champion, Cordelia’s burden, Wesley’s leadership role and Gunn’s sense of belonging are all addressed and put into a fantasy-world light. Over the next two episodes those roles will be torn down, have their flaws exposed and be ultimately overcome.