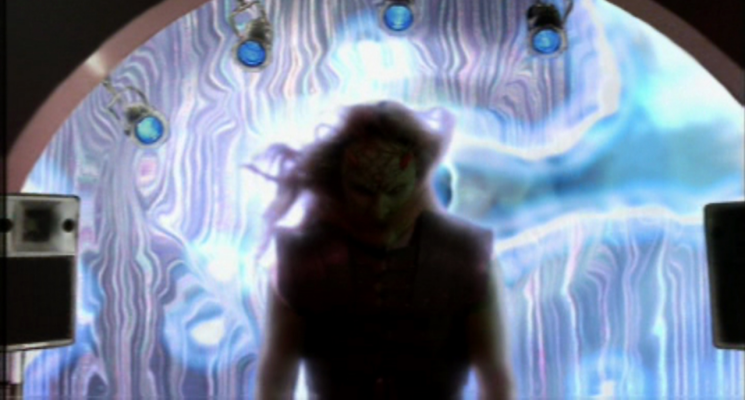 “Belonging,” like the past couple of episodes, is a fun installment that focuses on some character work tied together by a common theme. It’s the first installment, and more of a set up for, the Pylea arc, which kicks off officially in the episode following this one and carries us to the end of the season. It suffers a good deal from the dreaded “Part One” syndrome, the curse that inevitably follows set-up episodes and dulls them down due to their need to reserve the big events and dramatic climaxes for the episodes that follow. Some fun, well performed Whedonesque dialogue and bouncing around with the characters keeps it from total mediocrity, even if the main cast’s developments feel a bit light and re-hashed.

It’s no mystery what the theme is: Belonging. By half way through we have a good and believable handle on just how tough the identity crisis is becoming for all our characters. Everyone is happy with the group back together (as evidenced by the dinner scene), but there’s still unrest. Angel still feels out of place, Wesley’s not quite mentally equipped for his leadership role, Gunn can’t decide on his loyalties and Cordelia’s lifelong dreams are crashing down. Did I mention this was a light, funny episode? Oh, Joss. In the wake of the season’s main arc it still is good that the question of the future of the characters was directly addressed. All the players have been set on their new paths, but that doesn’t automatically destine them to walk it.

If anything, they have to escape our world’s trappings to endure the paths (which they literally do; Pylea!). We’ll begin as always with Angel, who’s made a play for the better for himself lately by killing less people and trying to get more sun, even if it’s artificial. But resolving to return to the land of the living does not instantly make him a part of it. He took a big step forward in “To Shanshu in LA” [1×22] and carried that forward all the way through up to “Reunion” [2×10], but suffered a serious regression for reasons we understand too well. Now he has to re-trace a lot of the steps he made to ensure he doesn’t make the same mistakes he made on his first try.

His arrogance cost a noble demon its life in “Judgement” [2×01] and having his human emotions played by Wolfram and Hart turned him into something darker and more merciless than Angelus. What can he do better? One could argue that would makes us human is our ability to grow; the show certainly does. To change and to experience things and be affected by them makes who we are and by giving up leadership of Angel Investigations Angel’s done that, but has little place to go besides there. He’s stuck where he was almost a year ago; he wants so badly to walk in the sun, as we see on the commercial set, but his past and his nature limit him.

Wesley, as I mentioned in “Dead End” [2×18], has been struggling with the nastier responsibilities of real leadership, instead passing some of them down to Angel. “Belonging” shows him ignoring them altogether as he is clearly becoming increasingly self-conscious about the new burdens placed on him. His father, who we first heard of in “I’ve Got You Under My Skin” [1×14] gives us re-affirmation of just where this insecurity comes from. We know he’s intelligent and capable, but as we first saw in S3 of Buffy, he has yet to develop confidence and a certain level of competence. Having to do such things in the light of people who may evaluate him is his greatest weakness, and in this episode it nearly proves fatal for the Drachen’s victim.

Cordy finally gets a break into commercial “acting,” but finds out about the dirtier, exploitative side of the business. It’s a life she’s wanted for many years, but it’s one she learns she can’t tolerate, even if she could commit to it; trapped by Angel’s destiny and her selection as his link. As her visions get more and more painful, it’s clear to her that she recognizes where she’s going, but it’s not a place she wants to belong. Despite her empathy for the suffering and love of her friends, she’s still a Sunnydale-raised kid who talks a bit like Buffy and feels best when she can have the material things in life, even if they’re not representative of personal worth like they were for her in early S1.

Finally, there’s Gunn. The decidedly non-reflective man of action is finally learning to take a long, hard look at himself. He’s given Angel the most flak about his betrayal of the gang, despite having done the exact same thing to his old neighbourhood gang. This was traceable to his sister’s death at the hands of vampires in “War Zone” [1×20] and his lifelong war against vampires; a rage that blinded the ‘stake-first’ fighter to the hypocrisy. He doesn’t really address that part until “That Old Gang of Mine” [3×03], but what does get brought up here is how torn his loyalties still are. Gunn’s been leaning towards Angel Investigations without realizing it, dressed in the guise of playing both sides equally.

His complete ignorance of the situation as well as his inability to be there to help George (something that would no doubt hit him hard because of his failure with Alonna), now make him re-examine if he’s been making the right choice.

If all of this seems like familiar ground, like things we could’ve inferred for ourselves before but are merely spelled out more clearly before us, that’s because they are. As entertaining and fun as this episode is, it pulls a trick on us by dressing up thematic exploration as development, when it’s only a re-establishment. The closest thing we get to development for the main character’s are Cordy’s feelings of utter dejection and the plot piece that is George’s death. Cordy and Gunn are plunged into more dire tests of their convictions concerning their places of belonging, and that will matter somewhat in the upcoming Pylea arc, which is what this episode is a primer for.

However, we’re not at a total loss for development, as we get a similar situation for The Host of Caritas, who we learn is actually Krevlorneswath of the Deathwok Clan. Lorne for short. Through Landok, his relative, we learn that he belongs in neither world. In ours he can’t fit in due to his appearance and much of his flamboyant nature would put him at odds with anyone not accustomed to West Hollywood. In his, an amoral world of medieval traditionalism, ignorance and chivalrous champions, he’s considered a disgrace by his family and his peers by refusing to be a mindless hunter and gatherer. Lorne has always been a creature of passion and art; not unlike an aesthetically bizarro-world Angel.

Unlike his brethren he chooses to use his abilities to help people, any people, because of his belief in a relativist way of life and his love of art. Unintelligent and rock-headed traditions bored and depressed him in Pylea, so it fits that when he found music, a thing literally created by change (in the pitch of the notes), it held a place for him. Like all good people or demons in show business, he found a way to belong in L.A., the place where no one else on Earth can belong. However, it’s still just primer, like what we got for the other characters, but it’s new information that gives us real motivation for a likeable character, and is the episode’s greatest strength.

The best way to look at this installment in the season is to view it as one big, collection of foreshadowing and exposition. There’s I things I’d regret mentioning here simply because I’d be mindlessly repeating myself come time to review the next three episodes, which is why the discussion of what these implications mean for the characters is kept brief. That’s not exactly a positive mark for this episode, but that it’s still devious enough to keep us along for the ride is a testament to the entertainment value and depth of the characters, even in such shallow situations.

+ The entire dinner scene. This is Whedonesque dialogue at its finest.
+ Gunn and Wes ‘poundin it,’ and then Angel joining in.
+ Cordy’s bikini. Wow. Damn you Joss for making the only point of her wearing it to show how people are obsessed over girls wearing such things and it how it emotionally damagesgirls when that obsession creates a requirement. Well made point, but damn!
+ Fred’s first appearance. Hi, Fred!
+ Lorne and Landok’s complete and utter mutual contempt. Perfect odd couple.

* Angel wants to ‘be in the sun’ and looks fondly on the idea of Lorne’s world: Champions highly-praised and roaming free, slaying evil wherever it lays. In “Through the Looking Glass” [2×21] he becomes such a champion to the Pylean people, but also learns the troubles of such a morally blank world.
* Wesley talks with his father, who belittles and criticizes him almost out of an instinct-like habit. When we meet him in “Lineage” [5×07], he does exactly the same thing, and we learn the reasons why he is so critical of his son.